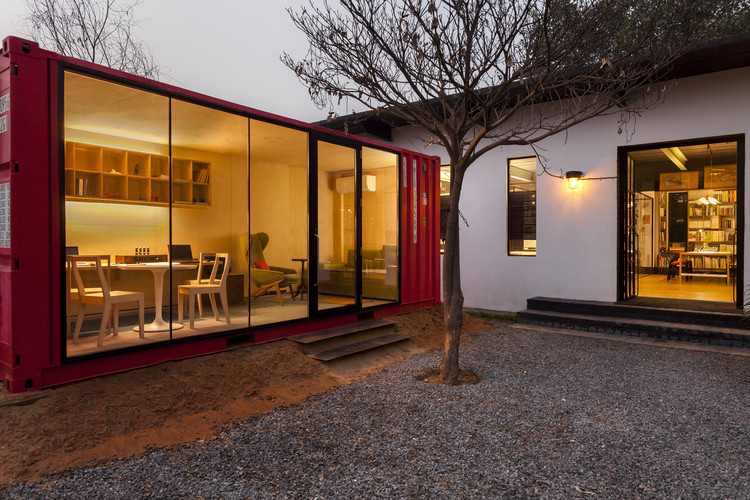 Text description provided by the architects. As the studio enters its teenage years of existence, it demanded a fun yet “architecturally charged” environment to conduct business. Moving out of a busy commercial surrounding to a quiet piece of land amidst blooming mustard fields hidden within the commotion, that is Delhi. It can be challenging to locate the studio; placed within the quaint boulevards lined with ficus foliage often hindering views to the randomly placed non-descriptive black gates. However, the gate has a “white” google pin for the curious eyes.

The visitor’s ingress on a bed of gravel guarded with trees on either side hiding the front lawn to the east. The gravel acts a porous surface which allows patches of reeds and grass to grow through- transforming landscape every day. One moves down this ceremonial pathway to be greeted by a deep red, shipping container floating on a mound of earth surrounded by token greenery. This cuboid is deconstructed with an acoustically lined double glazed facade, exposing the warm birch ply walls to the visitor. The insides host a white Saarinen-esque table with a deconstructed polder couch upholstered in grey and military green- the space doubles up as a break-out zone for private conversations/meetings or just some alone time after rigorous roundups with peers.

Turn away from the Red box, and we come across “The studio”, a white box -oriented east-west, nestled within dense foliage of ficus trees. The entire east façade is glazed, farmed within “super” thin black metal sections. The elevation looks over the private front lawn guarded by trees with trim foliage. The setting allows for the yard to be lit throughout the day, providing diffused light into the workspace and reducing the reliance on artificial lighting. Perforated screens on the south-facing windows cut down the glare while giving a glimpse of the constantly changing sky and the dense foliage enclosing the site.

The roof is constructed out of large Kashia-stone and finished with a thin layer of a screed, sandwiching insulation and waterproofing- An old age technique known as “Tukdi slab”. The increase thermal mass from the stone provides delayed heat transfer through convection within the layers. The slab rests upon on metal girders supported over load-bearing brick walls. The insides being exposed brickwork finished in a water-based matt-black paint required moisture free walls; thus the outsides are finished with hydraulic lime plaster and painted in white: reflecting direct and indirect solar gains. The overhangs are carefully designed to cut down the incidental sunlight and minimize the energy consumption without compromising on the desired comfort levels of the interior spaces. Following a minimalistic approach, which is both progressive and modern, the studio emphasizes materiality which hearkens back to the early 19th century. The 48-day frugal build is a testament to the saying “ True to the material”, making the experience of the studio analogous to the narrative of its construction.

The visitor directly enters 4m high space overlooking the open-library section of the studio and consequently settle themselves on to a colorful “wishbone” chair placed around the white library table- transforming the space for casual discussions and greetings. The walls display a journey of the firm, different projects, and accolades. Ideally one would place a giant table in a linear space, but a deliberate attempt is made at carefully layering the space into bays which is obstructed by elements to create depth and interest.

Interiors are predominantly charcoal black walls, offset by birch ply tables over natural finish cork flooring. The unique rhythms of brick piers and the windows provide juxtaposed grids of structure and planning, adding a new layer of complexity within the 4m high volume of free-flowing space.

All workstations are aligned perpendicular to the length of the built in the open studio space. As a creative practice, we believe design as a layered and additive process; the users keep adding diverse elements to the studio- A red bird was recently placed afloat at the entrance. Ancillaries and the conference room are separated from the multi-space office environment using black partitions with discrete doors leading into a concealed closet and general cloakrooms. The conference room is a manually operable floating partition with sliding ceiling, inspired by elements from Pierre Chareau’s Maison de Verre.

It can be extended to become an acoustically sound space or collapsed to become a part of the studio workspace, adding flexibility to the layout. The signature wall of the meeting room is painted white to capture the inflow of natural light through the glazing and give emphasis on the display panels. The Backdrop of the open workspace is shelving unit made out of recycled strand-board, housing the paper pantry and the media hub on one side and a nested bonket seating for the pantry on the other.

The studio offers spaces that are varying in character and volume such as the mezzanine level, music room and the break area that act as different emotive spaces. The scaffold lattice structure is another frequently used space for retreat along with the badminton court. The idea of the scaffold is to indicate continuity and construction. By integrating nature and activity with a working space, Architecture Discipline creates a productive, synergetic environment that defines their vision for a new office experience. 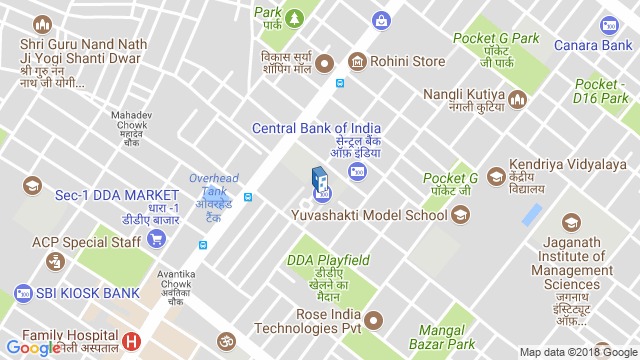