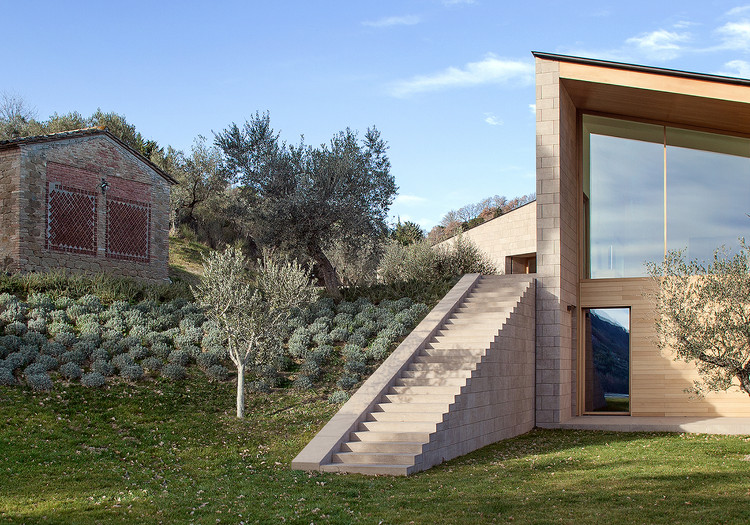 Text description provided by the architects. The house is located on a hillside characterized by the presence of numerous secular olive trees and a magnificent view to the south, in the direction of the city of Perugia. The building is organized on two levels: the upper floor dedicated to daytime activities functions, while the lower floor contains the bedrooms and all the service areas.

The two floors of the house solve the existing height difference between the private access road and the large lower lawn, the only horizontal area in the property. Uphill, the house looks like a low volume and thus establishes a better relationship with the small scale of the place, characterized by the presence of the small existing agricultural building, considered an element of great importance also in the new settlement layout.

Downhill, however, the house is manifested by the double height loggia open on the big lawn toward the swimming pool located at the southern end of the property. The entrance to the house takes place through the small loggia, defined by the long pitched copper roof which is lowered in the vicinity of the pedestrian access road being inserted between two existing olive trees, without altering the scale of the place.

The house, completely covered in local sandstone, is mostly closed to the north against the wind and opens to the south with large windows through which you establish relationships with the most significant aspects of the landscape near and far. The large loggia, like a deep frame, selects a precise portion of unique landscape unchanged over time. This image, which shows the profile of the historic city, in a magical balance between built environment and countryside, represents the fixed scene but always changing of domestic life. 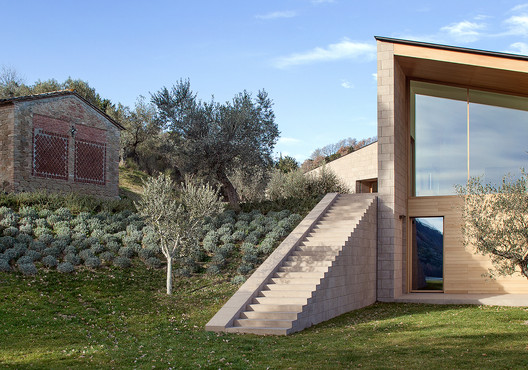