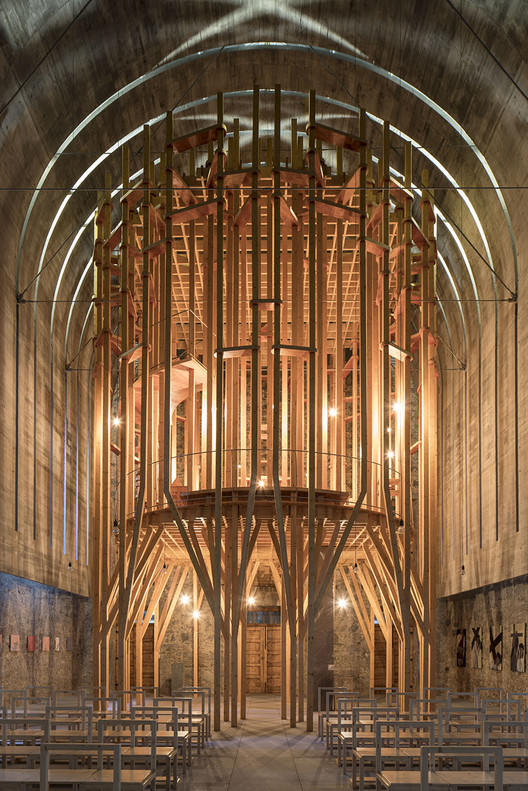 Text description provided by the architects. Cheia de Graça Chape is inserted in the Imaculada Chapel, in Braga.

The project focused on the restoration of the Imaculada Chapel and the high-choir, transforming it into a reserved space for the inhabitants of de Seminary – the Cheia de Graça Chapel. The total ceiling height of the intervening space and the outer walls of the room were taken advantage of, leaving the existing “skin” of stone that manifests around the chapels in a sculptural away.

The Chapel erected in wood, from the support structure to the planes conferring the space composed of several pieces of wood, fitted together, creating a balanced structure that manifests as a forest at the entrance of the sacred space. Its canopy creates a space dedicated to the inhabitants of the Seminary and its trunks a filter between the profane space and the sacred space, allowing the visitor to surrender to the space, surrender to the dimension of senses.

A concrete vault surrounds the chapels, imposing itself simple, light and suspended in space, defying its own materiallism. The openings in the dome that extend through its concrete walls create moments of openness, filtering the sunlight and granting a «quiet» accuracy and greater dignity to the structural elements of the roof. The vault creates, along with the remaining elements, a space of absolute “restless silence” remitting to introspection.

This concrete dome has a thickness of 12cm and it is supported by a steel structure almost imperceptible to the observer, allowing it to appear suspended.

The space is also endowed with an acoustic superior quality, its composition of acoustic sandwich panel on the roof and the elongated form of the dome allow for better performance. This brings another level of spatial interpretation, allowing space to be manifested by sound, creating a dialogue between space and the user. Because of this vault, Cheia de Graça Chapel assumes a circular form favoring the meeting, privacy and introspection to the inhabitants of the Seminary.

In the background, a marble slit rises, backlit naturally, transporting the viewer to another physical and spiritual dimension. Thus, by its composition and scale was given to this space a level of superior intelligibility and a spiritual dimension, allowing the dialogue between space, the individual and the divine. 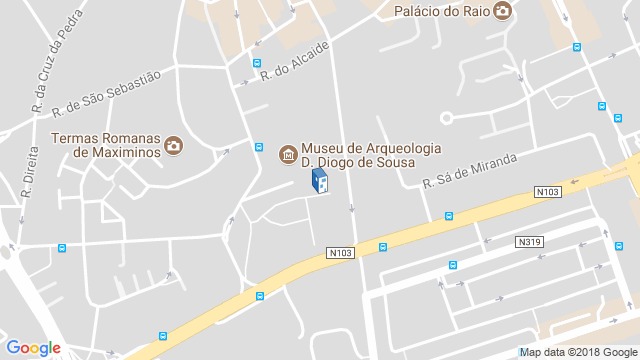