Donghua Chen & Partners released details of their proposal for the Lithuanian National Science and Innovation Center, an initiative known colloquially as “Science Island.” The competition saw entries from 144 teams, making it the largest design contest ever held in Lithuania. Donghua Chen & Partners were one of three finalists for the competition, with the entry by SMAR Architecture Studio ultimately chosen for realization. 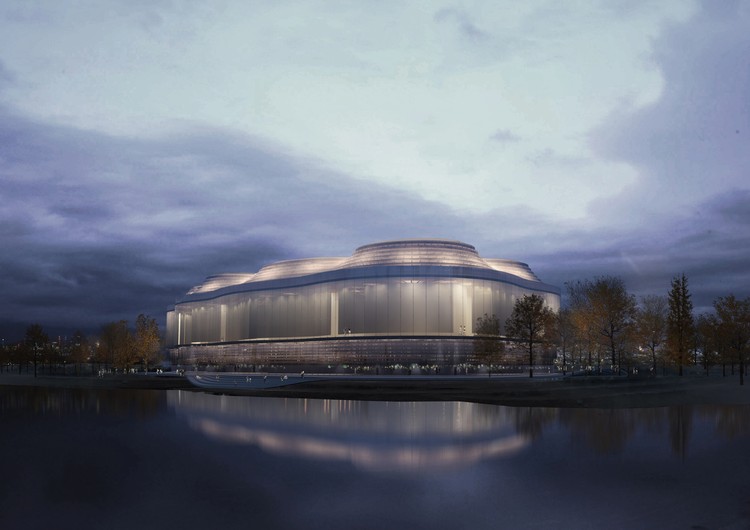 The scheme’s “Social Loop” seeks to engage the general public with science and innovation, with the building form designed to evoke a series of encounters and views as one traverses the area. Outdoor exhibitions and curtain-glazed facades strengthen the connection between the science and the public, a “consistent loop inside an urban and ecological system.”

The “Skyline Loop” makes reference to the rhythmic city skyline which the scheme contributes to, with a dynamic timber structure covered in a translucent PTFE membrane creating a soft, translucent, continuous form.

The “Circulation Loop” is separated into front-of-house and back-of-house functions, with a lobby, courtyard, souvenir shop, and cafeteria backed by exhibition preparation, workshop, staff office, storage, and plant facilities. On second floor, the program is ordered in a similar manner, with three “experience halls” and four event spaces containing a Black Box, Planetarium, Research Lab, and Experimentorium. These spaces are surrounded by a fluid loop of interactive and introductory areas, including galleries and study spaces.

The “Devolution Loop” references the process of using scientific direction as a methodology for design. Through algorithmic computation, a pool of forms and structures offers a range of design options, which allow for the evolution of a consistent, smooth program for the center.