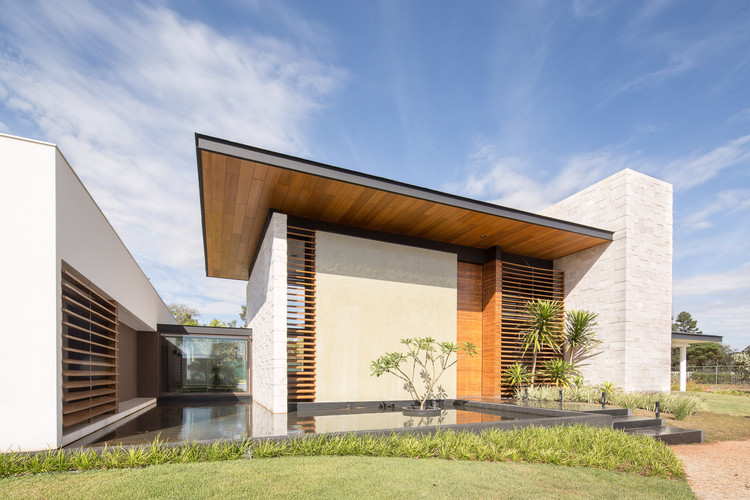 Text description provided by the architects. Situated in a 27,000 sqm lot, within a small gated community of 8 lots, this project has the premise of striking a balance between integrating the neighborhood and the maintenance of the dwellers’ privacy. For this reason, a courtyard connects the 3 blocks that constitute the plan. To the east, the bedrooms; to the west the BBQ grill, to the north the living room, and to the south the courtyard, which opens itself to the cerrado forest, a green area of another 2.500 sqm.

A one-story house, the structure has a mezzanine modeled to a room for watching television, from which the street, the swimming pool, and the high ceiling living room can be seen. In order to define the relationship between the central block and the lateral blocks, a roof covering with large overhangs which highlights a veneer of laminate wood, and a metallic contour finish was conceived. In addition, stones of rustic marble cover the stairway tower, and a water reservoir, and large wooden brise-soleils, a water pond turned into a mirror by a black bottom, and the prevalent green from the landscape are features of this structure. All these elements define an architectonic object with its specific significant when the house is viewed from the outside.

Once within the house, a different priority is evident, which can be seen in the interaction between the different. The living room is opened to the swimming pool; the swimming pool is integrated to the BBQ area, and the BBQ area is connected to the kitchen. From the private lounge of the bedrooms, one can proceed to the courtyard, from where he/she can interact with the mezzanine’s veranda. In the courtyard no longer the elements of the building are important, but the environment created by the lack of such elements.

Thus, the common living area is defined as a refuge, a living area, versus the street as a place for observation.