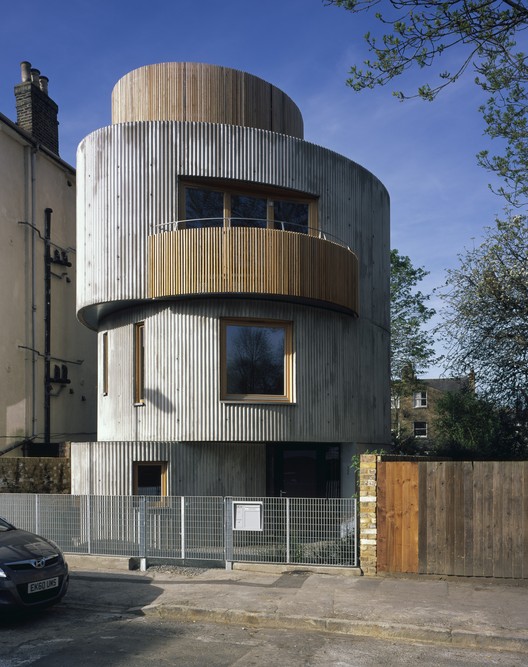 Text description provided by the architects. Vex is a unique architecture/sound collaboration. It is an in situ concrete house which arose out of the collaboration between musician Robin Rimbaud (known as ‘Scanner') and architects Chance de Silva.

Music and architecture both take as their starting point Erik Satie's 'Vexations' – a looping, repetitive piano work that lasts around 18 hours in continuous performance.

This is to our knowledge the first architecture/sound collaboration of this type since Le Corbusier/Xenakis/Varèse's Philips Pavilion of 1958. (In that it was envisaged as an integrated design collaboration, with the music and architecture symbiotic and made in parallel, rather than the sound added later as an installation in an existing building).

Internally, exposed concrete ceilings, elements of wall and a single elliptical column create a warm, cavelike feel – although the building is paradoxically very light with window positions responding to Satie’s musical score as well as contextual and sunlight parameters.

The building is a very bold addition to a London conservation area (of predominantly Victorian houses). It nudges forward of the historic building line to give views down the street, capture sunshine around the clock, and look out towards a local landmark church.

The building is triple-glazed, highly insulated and, with very good thermal mass from the concrete, has a simply-controlled internal environment using an efficient condensing gas boiler and underfloor heating.

Sound is incorporated in a hardwired Sonos system controlled from iPod or mobile phone.