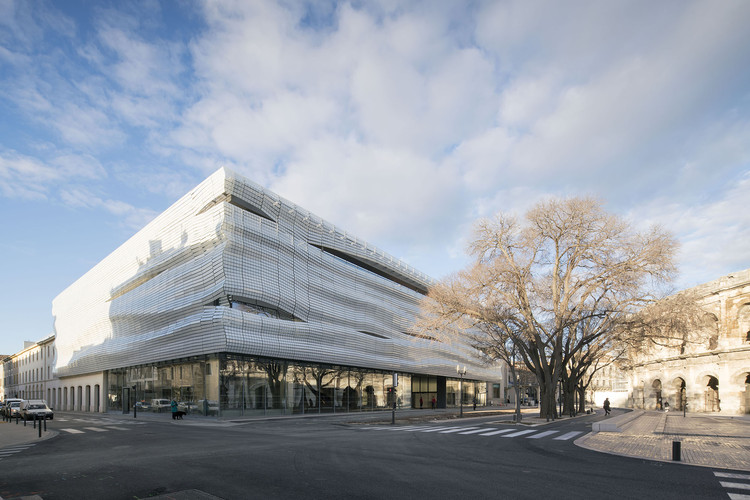 Text description provided by the architects. An important complex of Roman culture and an innovative museum, archeological garden and living environment, the Musée de la Romanité is the largest contemporary architectural and cultural event for 2018 in France. It opened for the public on June 2, 2018, with over 5,000 visitors in the first day (10,000 visitors in the whole weekend). Its exceptional archeological collections contain over 25,000 pieces, of which some 5,000 are exhibited over 9,100 m².

The building is organized around an interior street that follows the trace of the ancient Augustan rampart. Accessible to all, this public passageway creates a visual opening and links the plaza surrounding the Amphitheater with the archeological garden. As visitors cross through the museum’s ground floor, they are invited to discover the ancient treasures of the site. In the building’s core, a 17-meter atrium reveals a fragment of the Propylaea of the Sanctuary of the Fountain, placed within a spectacular reconstitution of this sacred site dating from the foundation of the pre-Roman city. This first-ever public recreation is an invitation to discover the entire collections and interior of the museum.

Situated at the entrance to the ancient city, the museum opens the view to the Amphitheater through transparent its ground floor. The supple drapery of the façade evokes a Roman toga and the square glass plates composing it combines modern transparency with the tradition of a major Roman art: mosaics. It also subtly evokes a major element of the museum’s collections. This translucent glass skin is composed of 7,000 screen-printed glass plates covering a surface of 2,500 m2. The reflections and undulations of this glass mosaic change appearance over the course of the day.

A number of openings in the façade offer different views of the Amphitheater, and the archeological garden below. Throughout the exhibition spaces, an uninterrupted dialog is maintained between the museography and the exterior, causing the city to penetrate the museum.

Organized around the Roman wall and other vestiges discovered during the excavations prior to leveling work, the archeological garden is imagined as a “green museum.” All traces of history discovered here have been preserved and restored and are now freely accessible to all visitors and strollers. This green public space of 3,500 m²thought by Régis Guignard is structured in three layers corresponding to the three major periods – the Gauls, the Romans and the Middle Ages – of the museographic trail, thus enriching and completing the scientific purpose while offering a large coherence.

The green roof, which wasn’t planned to the competition program, created by Elizabeth de Portzamparc as a culminating point of the museum ascentionnal trail. It punctuates the visit by offering a belvedere on Nîmes and its 21 centuries of history, with the Amphitheater in the foreground and, in the distance, the Tour Magne, dating from the city’s founding. This public space, a meeting place, accessible to all, a city square up above, brings urban life up to the very top of the museum. 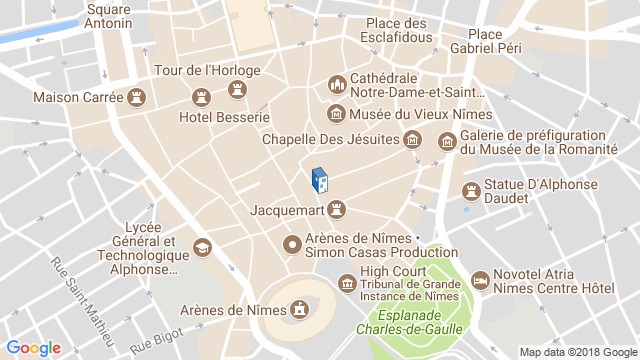 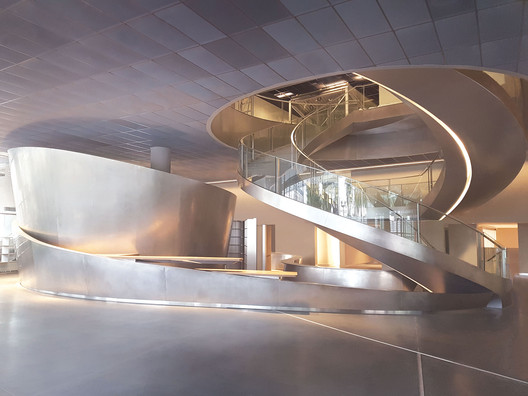 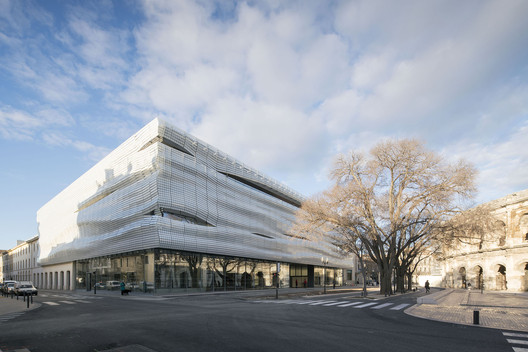