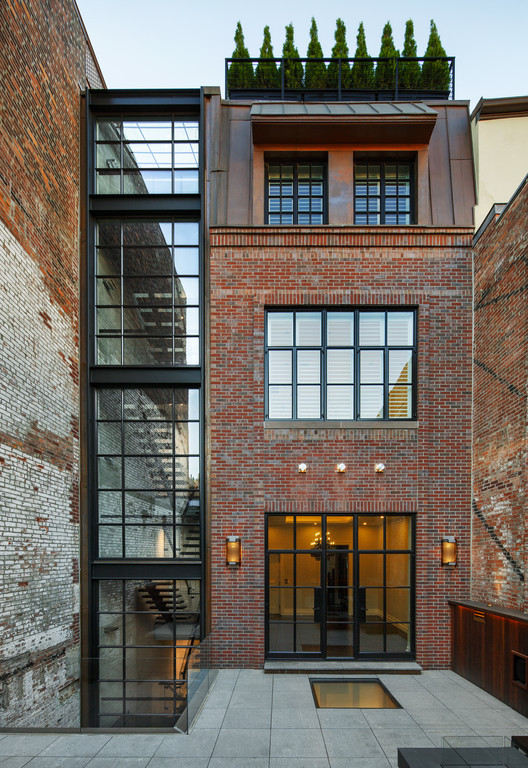 Text description provided by the architects. Chestnut Street Townhouse is the first house to be built in Boston’s Beacon Hill neighborhood in 50 years. Located in the “Flat,” an area off the hill and across Charles Street, the original structure was thought to have been a stable before it was converted into a house in the 1920s. Deemed unsalvageable by a series of structural engineers, the building was condemned and the approval process began for its replacement. Equipped with an allegiance to the concerns of the local preservation community and a precise understanding of the neighborhood’s historic architectural elements, the team adopted a careful, surgical approach to the design of the new townhouse so as to complement rather than upstage the neighboring buildings.

The design team drew inspiration from the original structure in an effort to maintain contextual sensitivity. It was noted that the color of brick used was slightly different than the adjacent buildings, separating the façades and punctuating the streetscape. In addition, the original design incorporated a decorative brick frame that served a dual purpose: to accentuate window openings and articulate the depth of the façade. In the new design, the same approach was taken for the color of brick and soldier coursing was incorporated to achieve a similar result to the original frame. An atelier window was added, flanked with smaller windows to provide an accent to the street’s repetitive rhythm. Period-evocative materials, such as copper, wrought iron, and steel, anchor the building to the neighborhood’s historical context.

In order to maximize natural light penetration to the living spaces, the main stair was pushed to the side and rear and fabricated in steel and glass. The stair has a skylight at the top and is visible from the second-floor courtyard and the first-floor garden. Additional skylights were included in the kitchen area to further facilitate natural light. A copper dormer was also added, creating a roof deck with 360-degree views. The home’s interior palette strikes a balance of dark and light. Cocoa-stained white oak is used for flooring and most millwork. Whitewashes over the kitchen and beyond, accented by Calacatta marble and the glass and steel of windows and stairs. In the formal living room, the black granite of the fireplace nods to tradition but is executed in a modern, minimalist way.

A similar approach was taken to the fireplace in the master bedroom, sheathed in marble. Calacatta appears again in both the master and two upper-floor bathrooms. In particular, the master bath offers the respite of white floor tiles, vanities, and monochrome vessel tub. Chestnut Street Townhouse embodies the importance of a “do no harm” attitude when approaching this type of historic infill. With high quality serving as the cornerstone, it was crucial to ensure that the new structure will stand the test of time in a contextual and literal way. The project is intended to possess a sense of place, striving to satisfy the needs of the client, the local preservation community, and the historic Beacon Hill neighborhood.