Many entrants focused on examining the idea of socially inclusive architecture, attempting to break down spatial segregation within Mumbai, and recognizing that the collective well-being of all its inhabitants is crucial to the city’s success moving forward. Reincarnation Network - a team of students from the Moscow Institute of Architecture - won the competition with their careful appreciation of the existing village and its traditions. The proposal developed and utilized the current urban fabric in a flexible scheme, focusing upon a “rebirth” rather than a reinvention of the site, while also paying attention to the unique contextual topography in a series of vibrant visualizations.

From the Architects: Reincarnation is the philosophical or religious concept that an aspect of a living being starts a new life in a different physical body or form after each biological death. It is also called rebirth or transmigration and is a part of the Samsara doctrine of cyclic existence.

The urban fabric of the city of Mumbai with such a great historical and cultural background should experience the similar process of rebirth saving the spirit of the place with its unique context and traditions. We invent the new typologies borrowing forms and colors from national Indian dwellings, but taking into consideration modem rapid urbanization. We install the modules of different typologies into a continuous flexible structural network, which provides Koli and Worli with all the possible scenarios that the inhabitants are able to create.

The new development grows from the Worli Koliwada village, saving all the routes. The territory is divided into two parts, which are flexible, rising and transformable Worli housing with their own facilities for the neighborhood: the school, public library, a pool, a garden and the floating village of Koli with all the facilities for fishery and fish trade such as the marina, fish fanning. In the center of the territory, the new historical and cultural building appears uniting all the territory and serving as a museum and a touristic and public route, opening spectacular views and leading to the new Hindu temple. We create new open public spaces such as the new fish market, observatory, public squares, open cinema, public swimming pool and the scene to involve both tourists and citizens.

The dwellings are risen above the level of flooding to protect the inhabitants during the monsoon period. The coastal lines of the site are reinforced and a system of breakwaters is erected to protect the land from the waves and floods.

From the Architects: A city traced by the design of unequal income distribution and built over the struggle to the right of adequate housing for all people. Two worlds, two realities given by differences of opportunity and space. Each part of this dual city has its own urban logic and dynamics, whose access to the infrastructures comes from a historical process of uneven distribution of rights and opportunities. Between them, an emptiness that, through its permanence, is transformed into a design tool to conquer the right to the space and citizenship, reinforcing the idea of vitality, diversity and urban plurality in the land regularization process, transforming the city into a place for social interaction.

Respecting the empty space is an act of resistance. In this way, the project places architecture as a capable device of perceiving the urban social potential in unused places, as a dream practice and construction capable of seeing in the empty a condition of sociability and reveals, in a paradigm shift, the use of the bottom of the bridge for life programs, transforming 'the life under the bridge' - a city’s infrastructure-line - into an expandable place of citizenship experience. The bridge, a monofunctional element over the sea, achieves multiple habitability power. The urgency through the appropriation of residual spaces aims to respond the city's vocation to exist in a plentiful and plural way. Just like the fishermen who see the sea as life support, the project includes water in the whole program, not only as an infrastructure but as a habitable culture.

This is the foundation of the systemic and expandable line of shelters that, vertically, connects people to collective passenger transport over the bridge and to small boats over the water. Next to them, empty at multiple scales, from the small courtyard of houses that receive collective clothes lines in a direct connection to the vernacular architecture, to the small squares creating nodal points of conviviality, providing a comfortable and familiar living environment. In its roofs, between the bridge and the air that circulates between the houses and the small local trades among the structure of wood and iron, is a large free park, as a ceiling that unites through the observation of life the desire to form a city’s trace in a multiple and infinity line, free and alive, festive and pulsating, as a call that incites reflection and action in a search for a fair and equitable world for all.

From the Architects: Worli Koliwada is currently threatened to disappear under water due to climate change. This project aims to document the situation and allows imagination draw the new story. In order to keep the story going, a system that supports the ongoing integration of land and water is proposed. It is made up of a typology raised over the base of the existing situation aiming to reflect all what is below the surface of the water. When boats become the only way to move, the drowned are lost in sight below the evolving houses oriented around the core, which starts from the villages base where it all began. Though the city and history will be lost in sight, they will still be kept in memory through the vertical growth of their heritage.

From the Architects: Koliwada´s Koliving is about sustainable design creating places that work for people, which are socially inclusive, as well as environmentally resilient. Responding to the unique qualities, traditions, and needs of the Worli Koliwada Peninsula, we propose a sustainable community plan, which aims to promote a sense of equality, belonging and pride among existing and new residents. This is achieved, in part, through ‘common ground’, on land and on water: attractive new public spaces, streets that encourage life and activity, new infrastructure and highly adaptable mixed residential units – an exciting model to inspire communities addressing issues of resilience, growth, and integration around the world.

News via: Arch Out Loud 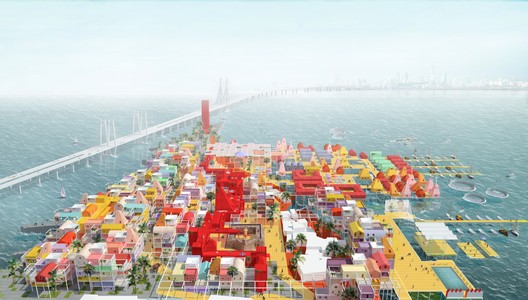