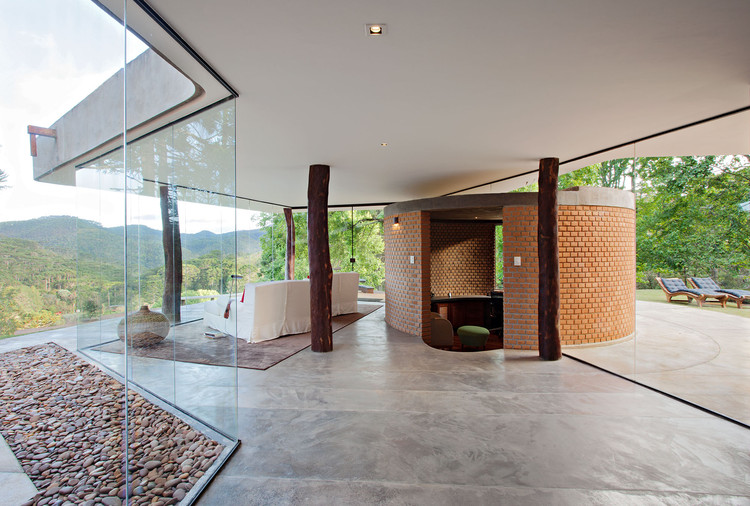 Text description provided by the architects. Designed in the early 1980s, this country house was completed in 2014, two years after the death of its author, Architect Paulo Bastos, in 2012. Built in Sapucaí-Mirim, a city located by Serra da Mantiqueira, a mountain range that separates the states of São Paulo and Minas Gerais, the residence was inserted in a natural glade into the woods. The location was carefully chosen by the author, in absolute respect and harmony with the existing vegetation, abundant in Araucárias, large trees indigenous of this mountainous region.

The request of the owner (a former student of Bastos who ended up pursuing another professional path) was simple: a four-bedroom vacation home with an indoor pool. The architect organized the program in three ground blocks, which were connected by sometimes inside/outside circulations, in a conception that spreads the constructions throughout the terrain, trying to take advantage, in the best possible way, of the exuberant landscape of the surroundings.

In the entry way of the residence there is a rectilinear pavilion, which shelters guest rooms, a workshop and a garage, in addition to a home theater (that occupies a place originally designed for games room). Two circulations connect this pavilion with the social and convivial block, where the dining room and living room are spread freely and in full visual contact with the surrounding nature, thanks to the glass closures present in most of its perimeter.

On a lower level of the dining/living room area, taking advantage of the sloping terrain, is the indoor heated swimming pool, which is bathed by natural light through the sheds of its roof. Having a volume of its own, the swimming pool pavilion is associated with the social block, even though it effectively represents an extension of it. Finally, seeking to provide greater comfort and privacy, the group of dormitories (three suites) is located in a separate volume, connected to the social block through a closed but transparent glass circulation.

Looking to explore as much as possible the very expression of the (few) materials used, the architect chose clay bricks (that appear throughout the residence); wooden pillars made of Aroeira, (a native Brazil tree that was used in their natural trunk shape), metallic/concrete beams and concrete slabs compound the structure of the residence. Floors, except inside the dormitories, were executed in burnt cement, with joints positioned according to a specific design.

After the passing of Architect Paulo Bastos, the company is now lead by his partners, Architects Nelson Xavier (FAU-USP, 1984) and Luciane Shoyama (FAU-UNESP, 1995), who maintained the company’s corporate name and have sought to preserve the memory and work of its founder, a reference in Brazilian Modernist Architecture.