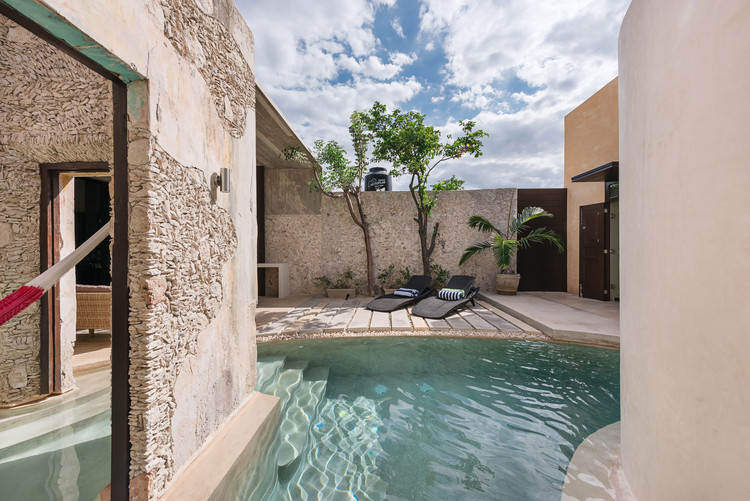 Text description provided by the architects. Casa Xólotl site is in a building within the historic center of Mérida`s city. Located in a not crowded street, the Main facade faces the street containing a house dedicated for resting, which overturns and contains the visuals inside it.

The Project arises in a 100m2 pre-existing old house, composed of 3 main bays (social area, kitchen, bedroom and bathroom). Enclosed by a plot of ten by twenty-two meters. The new program must had to accommodate a social area with terrace, a pool and 2 bedroom each one with its own bathroom.

The main access to the property is located at the right extreme of the first bay, which develops through a lobby that serves as a pause between urban reality and the serene interior environment. The rest of the bay had enough space to develop a bedroom with an internal bathroom.

All the social area is located in the second bay. The living room, the dining room and the kitchen are developed in n a single space, which is linked to the third bay through different windows that help fuse space visually and functionally.

The third bay of the property was the more intervened one. The poor condition of the original slab was replaced with a light one, which contrasted with its materiality concept. Sheltering the terrace, the concrete slab, the structure of it passes tangent to the existing walls without touching them.

The master bedroom is located at the rear of the lot, as an independent Villa, serving as the focal view from the inside of the Main House, and borders the central patio, containing the views inside it.

As a result, form the reduced measurements of the lot, the placement of the master bedroom, and the preexisting house and a traditional cistern, the pool becomes the main element of the patio. Placed between both constructions, old and new,  the pool floods the remains of the posterior bay and surrounds the cistern, generating greater contact and integration to the terrace. The flooded room becomes the visual focus from the entrance and becomes a space in which the interior-exterior limits blur and fuse.

The enveloping materials of the house combine new textures with the original textures, generating contrast with the marks product of the passage of time. The interior-exterior boundary between the hammock social area and the terrace is accentuated by exposing the stone material that composes the dividing wall. The cover and structure of the terrace, made with reinforced concrete and left without finer finish, show their earlier age with a sober palette.