Morphosis has released details of their competition-winning masterplan for Unicorn Island in Chengdu, China. One of four entrants to be successful, including the OMA scheme we covered yesterday, Morphosis were recognized for their “walkable park city interweaving business resources, green infrastructure, and lifestyle” to offer the optimum conditions for both large and small companies to thrive in the Chinese development zone.

As the Chinese economy transitions from a production-based system to one driven by services, the Unicorn island masterplan is an initiative commissioned by the Chengdu government to offer state-of-the-art resources and networks for both start-up firms and so-called “Unicorn” companies, those with a value of over one billion US dollars. 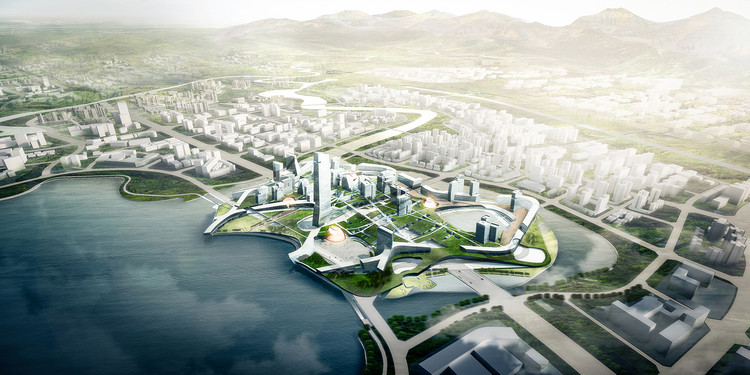 Spanning a site area of 67 hectares, the Morphosis scheme is envisioned as a walkable district lying in close proximity to Chengdu International Airport, the city center, and the central rail station. Positioned on Xing Long Lake, the scheme seeks to contribute to the Chengdu skyline, and create an “identity for China’s booming startup community.”

The scheme centers on a mixed-use approach, comprising a mix of high-end residential communities, recreational areas, and office space. The masterplan is organized into four neighborhoods, each responding to a different stage of development for a successful Unicorn company. The four neighborhoods each offer flexible office space, shared resource hubs, and satellite outposts of Chengdu’s leading universities.

For the scheme’s development, Morphosis worked in collaboration with sustainable designers Buro Happold. News of their winning entry comes as OMA also release images and details of their winning scheme for Unicorn Island. The other successful entrants were Foster + Partners, and Isozaki, Aoki & Associates.

The scheme also represents the latest statement of intent by Chengdu to become a technological hub, announced only weeks after Aedas unveiled a mixed-use “Cloud City” masterplan for the development area.

OMA Among Winners of Competition for Unicorn Island Masterplan in China

OMA has been announced as one of four firms to win an international competition for the design of Unicorn Island in Chengdu, an "innovative masterplan specifically designed for New Economy companies." 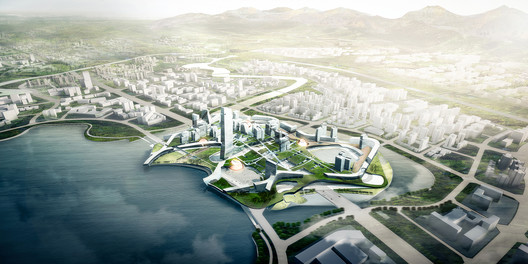