German architecture firms Johannes Kappler Architektur und Städtebau, Super Future Collective, and Topotek 1 Architektur have released images of a competition-winning design for a new Concert Hall in Nuremberg. Designed as an addition to the ensemble of the Meistersingerhalle, the hall engages the existing infrastructure and context to create a connection between the present landscape and public space.

The combination of the existing building and the new translucent exterior envelope provide "a house with four fronts" that engages the surrounding landscape on all sides.

It combines architecture, program and urban development into a specific entity, suitable only to this particular location.

The design for the hall, which seats over 1,500 people, is an ideal "shoebox" style space with proportions following a ratio of 2:1:1. The hall also boasts the ability to reach a reverberation time near 2 seconds, which is on par with the most world-class performance halls. With the largest distance from a seat to the stage being no more than 35 meters, minimal sound quality is lost even from the farthest seat in the audience.

Correction Update: This article originally identified Topotek 1 as the sole designer of the design. The article has been updated to credit Johannes Kappler Architektur und Städtebau and Super Future Collective. ArchDaily regrets the error. 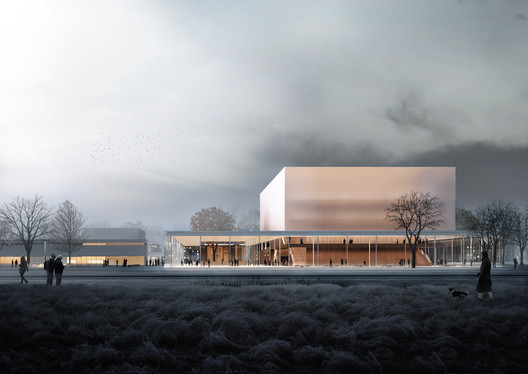