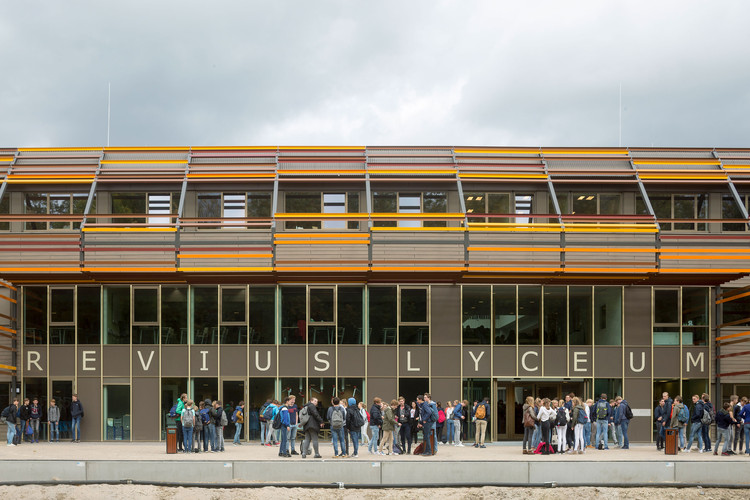 Text description provided by the architects. Recently a colorful new school building has been delivered in Doorn, The Netherlands. The total scheme of landscape and buildings was designed by Spring Architecten in collaboration with MoederscheimMoonen Architects. The team of architects worked intensively on this comprehensive task which ultimately led to a real 'education estate'.

A natural center
The entire building process was organized so that the existing school could continue to fully function whilst construction onsite was taking place. The architects came up with a smart plan in which education and sport were divided into two separate buildings. This made it possible for construction and demolition to proceed in phases so that the new school could be built on the site of the old sports halls, after they had been rebuilt elsewhere. The site of the new school is in fact at the core of the total terrain and so causes the new school to become a natural focal point. Occupying the site of the old school building is a large water feature that has been created to ensure that the previous water issues on site are finally a thing of the past.

House Revius - an efficient, inspiring and sustainable learning environment
From the architects: 'Our ambition was to design a compact school. A school building without corridors and where all rooms would become effective learning spaces. This has resulted in a compact three-layer design in which the different study plazas and classrooms are clustered around the dynamic heart of the school. Our design strategy has enabled us to realize fewer traffic space than originally calculated, leading to more squaremeters of study space. The building also contains a number of unique spaces and functions that create an overall inspiring learning environment. The auditorium, the many practical rooms and the study room are the real eye catchers in addition to the regular classrooms. '

The facade of the building has a special appearance and references the nearby ‘House Doorn’. From the architects: 'The area of Doorn is known for its many estates. The typical relationship between the landscape and the powerful detached country house certainly influenced our design. We actually made a building in a building; a very compact three-layer building within the skin of a two-tier building with a roof. This is expressed by the second facade that we have created. This facade, with colored steel slats, provides a powerful and recognizable gesture in the environment and a gradual transition between inside and outside. Each side of the building has large gates within the slat structure: the striking and recognizable face of "the house”; at the same time these openings form a connection between the landscape and the unique spaces”.

The compact school and the sports building are designed with various innovative techniques that result in a future-proof and sustainable design. For instance, a heat pump system is used which uses the outside air as an energy source. In combination with the many PV panels, they have become buildings without a gas connection, where all rooms are individually adjustable for cooling, heating, ventilation and lighting. This has created an optimal learning and working climate.

An estate for sports
Sport is an important part of education at the Revius Lyceum. It played a very prominent role in the design of the landscape. For example, the main sports field at the rear of the site is surrounded by beautiful trees, and has therefore remained unaffected. The terrain design, however, also accommodates many new sporting facilities such as a beach volleyball court, a panna-soccer cage and various other elements that invite exercise and different activities.

The sports building itself has also been influenced by the surrounding landscape. In the design of this building, the three different sports halls are placed around a monumental tree. The tree creates an attraction towards entering the sports building and is also emphasized by the choice of warm and natural materials. The architectural appearance can be characterized by the interchanging 'volumes'; the gymnasiums together with the low-rise changing rooms form a varied picture of volumes with different heights. To link these spaces, it was decided to let the plinth be the binding element, both in terms of materialization and transparency.

Awesome and Bright
The complex has been in use since the beginning of the school year in August. The reactions of the pupils after the first day of school can be summarized as 'awesome!', and 'It’s so light everywhere!'. The teachers' reactions have been just as enthusiastic, one particularly mentioning the direct relationship between the classrooms and the study plazas. The new Revius Lyceum has been definitively accepted! 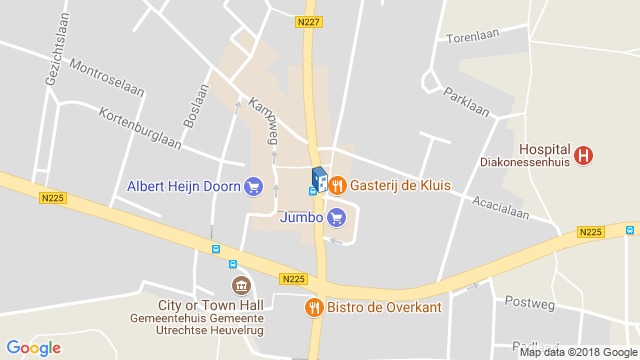