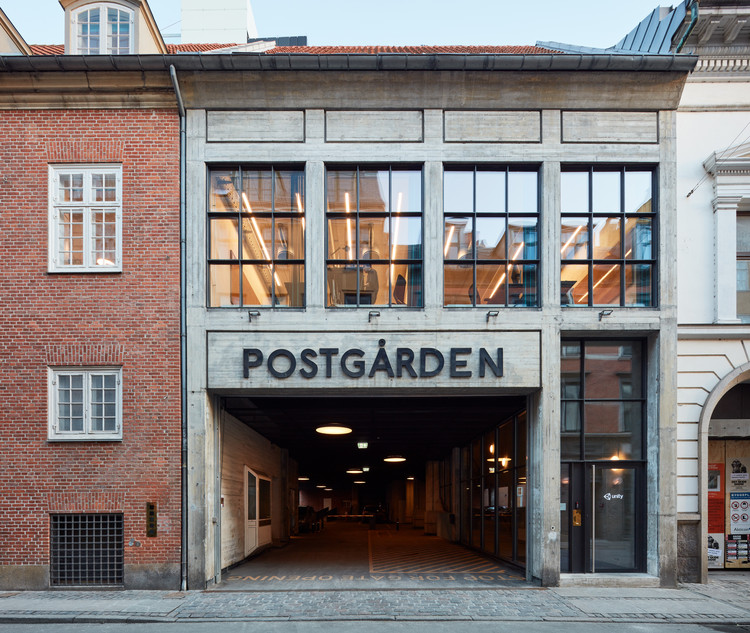 Text description provided by the architects. Postgården is an example of how, through careful renovation and by employing simple yet bold measures, it is possible to transform a closed historic property in the middle of Copenhagen into a vibrant and welcoming building that now opens up onto the street and plays an active role in the life of the city.

The former royal post office is an iconic building with a long and fascinating past. From 1780 to 1912 it was the post office headquarters, and subsequently headquarters of the telegraph service and the state telephone service, and then from 1912 to 2015 it was used as a post office. Over the years, several adjoining buildings were acquired and extensions added, so that the Postgården complex now counts ten buildings from different eras, and almost occupies a complete block. In the course of a three-year process, Årstiderne Arkitekter has carefully renovated and revitalised the former post office’s 16,000 square metres.

“Postgården is located on one of the busiest shopping streets in Copenhagen, but with its closed facades and high windows, it has up until now had its back turned to the city. The vision for the project has therefore been to open up the block and invite the public inside. The project involved taking a well-known site in Copenhagen –originally a workplace for several hundred people– and re-establishing it as a central address for shops and offices.”
- Mikkel Westfall, creative director and partner, Årstiderne Arkitekter

Careful renovation respectful of the past
Postgården is a building that many Copenhageners and historians hold dear. Therefore it was imperative to renovate the building carefully and meticulously while continuously focusing on preserving its historical features in the best possible way. Consequently, it was essential to understand and identify the qualities of the existing building in order to preserve and emphasise the details that bear evidence to its special history.

“The renovation work has been carried out on the building’s terms as it were, and this largely explains why the project has been so successful. We looked at the building room by room, and identified what needed to be preserved and what each room should be used for.” - Mikkel Westfall, creative director and partner, Årstiderne Arkitekter

In renovating Postgården, a conscious decision was made not to completely change the look of the building. Through studying the old drawings, the building’s qualities have been preserved, and while respecting the architecture and its history, it has been sensitively adapted to meet modern requirements, including improved and level-free access from the street to all tenancies on the ground floor.

Some parts of the complex dating from 1729 are listed, and here the facades and interiors have been carefully restored while respecting their heritage value. The whole process has involved close cooperation between specialists and tradesmen experienced at conservation work.

Recreated as an open and engaging building
As a post office and distribution centre, Postgården was a daily workplace for 700 men and women who sorted the post before delivering it on bicycles, and the building was a bustling and integrated part of Købmagergade. Since then, it has stood almost empty –and at the time it was bought by the current owner, only 40 employees remained.

Based on a thorough analysis of the building’s potential and that of its surroundings, it was decided to rebuild the property to create a new framework for a number of businesses, showrooms and retail outlets, so that there are now 800 people working there. Today, Postgården is home to leading Danish furniture and design brands such as Fritz Hansen and Fredericia Furniture as well as companies like Unity, Momondo and H&M’s new ARKET store.

The main architectural thrust has been to open up the introverted property towards the city with large, open shopfronts on the ground floor. On the other floors, spacious leasehold offices have been established with plenty of natural daylight, while the roof levels have been enlarged and turned into common recreational outdoor areas for the building’s employees.

Following the revitalisation of the building, a stream of people arrive each day for work, and Postgården is once again bursting with life and activity and giving something back to the city. In other words, this formerly rather quiet stretch of Købmagergade has been transformed into a natural and integrated part of the surrounding urban scene, directly linked as it is to the main pedestrian shopping street Strøget; this has also had a positive impact on business life and smaller enterprises in the immediate vicinity.

“In redeveloping Postgården, a place which attracts and connects people has been recreated in the heart of the city. As a result of the transformation, life in and around the building has rubbed off on the surrounding shops; this is now a place in the city where shoppers once again stop and meet – at Postgården. It is helping to lift the city into a collective space.” - Mikkel Westfall, creative director and partner, Årstiderne Arkitekter

To reflect the changed role of Postgården, landscape architects are working to upgrade the surrounding streets, with new paving being laid in Valkendorfstræde and Løvstræde. In addition, traffic is being re-routed, so that cars now take second place to pedestrians.

The transformation has therefore not just been important for Postgården –it has given the entire neighbourhood a lift and attracted interesting retailers, which is positively impacting neighbouring businesses and the urban environment in general. 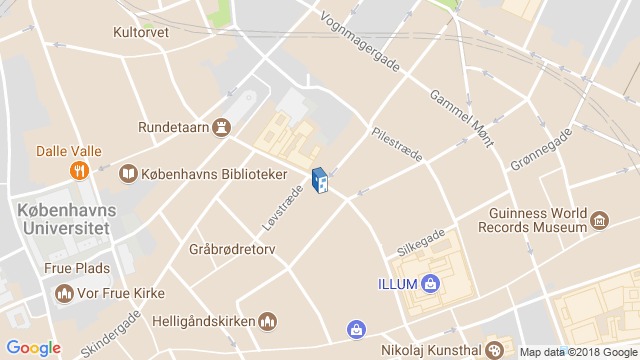