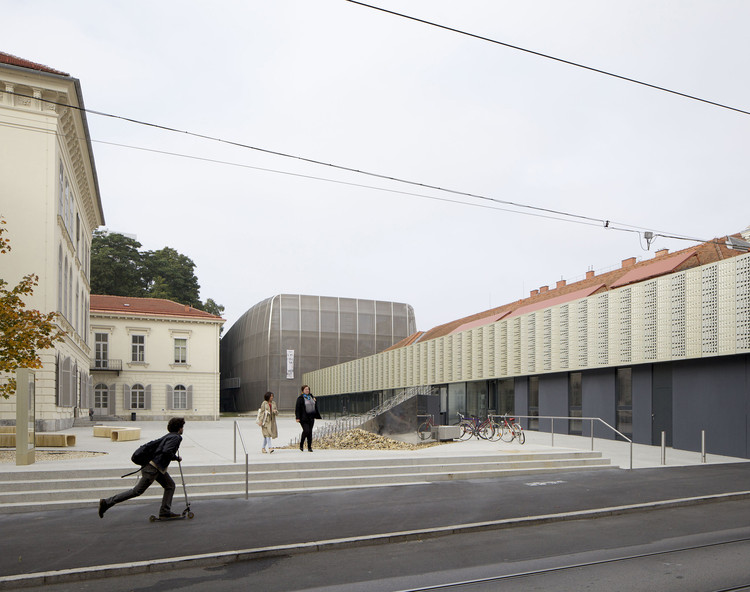 Text description provided by the architects. The campus of the University of Music and Performing Arts Graz is located close to the city centerin Palais Meran, the former residence of Archduke Johann, dating from 1841. Together with MUMUTH, the university’s house of music and concert hall designed by UNStudio, and the former horse stables, which are now home to Theater im Palais (TIP), it forms a square.

In 2011 balloon won a competition aiming at renovating TIP, which is home to the drama department, and redesigning the square linking Palais, MUMUTH and TIP.

balloon always try to look at the bigger picture when they start working on a project.Their work is based on a context-sensitive approach towards existing buildings and their surroundings. In this particular case, the urban planning dimension and the meaning of the place needed to be highlighted.With the TIP extensionballoon had a building in mind with significance beyond the campus, one that communicates with the city. They wanted to both design a new foyer that would homogenize the different parts of the TIP building and also create an urban space that would live up to the high standards set by the university and the surrounding urban environment by opening up the closed courtyard between Palais Meran and TIP onto Leonhardstrasse.

The TIP buildings previously appeared very heterogeneous. They are now covered by a surrounding golden baldachin and unified to frame one single architectonic form. This semi-transparent baldachin is constructed out of 3mm aluminum panels cut and folded to form a customized pattern. The ornament was developed out of a chronophotograph by physiologist and photography pioneer, Étienne-Jules Marey, which shows the sequence of movements of a somersault. The old boundary wall of the palais remained untouched during renovations – its silhouette is still visible behind the baldachin.

The new foyer provides the drama department with a 300 square meters multipurpose space. This elegant inside space takes on all necessary functions such as that of a bar, payment desk, wardrobe and side stage, in a way that is both generous and efficient. It can be used flexibly and can be adapted, using floor-to-ceiling curtains. It also houses offices for stagecraft, a backstage, and a student lounge. The golden baldachin outside protects the foyer against the sun in the west. The suspended ceiling in the foyer has the same design pattern.

The functional areas “theatre” and “institute” have separate entrances. They can be connected or disconnected as required. In the foyer, a built-in oblong piece of furniture provides a wardrobe for guests, buffet area and a tea kitchen. When the theatre is open to the public, the furniture also functions as a screen for the entrance to the institute rooms in the existing building. Mobile room divisions consisting of curtains make it possible to keep the large open space of the foyer.

The entire bottom of the foyer façade is glazed and can be partly opened. That way, the new foyer, the public open space and the palais merge into a spatial unit. 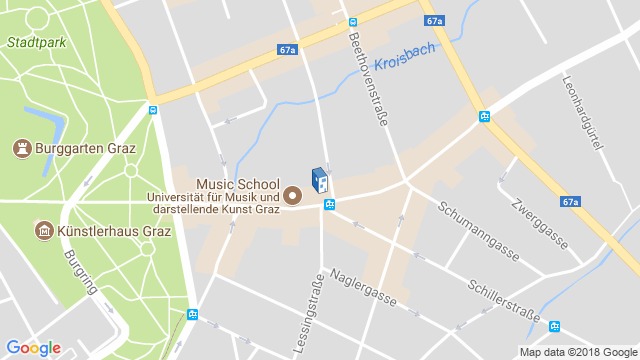