Save
Co-Living, Custom-Order Homes, and Creative Economies: Is This the Future of High-Density Housing?
Share
Or
Copy

This article was originally published on Autodesk's Redshift publication as "Customizable Communities Could Be the Key to the Future of Urban Housing."

London has a fascinating history of urbanization that stretches back to Roman settlement in 43 AD. During the Industrial Revolution and Victorian Era, the city’s population peaked, as did its problems related to population density. The air was filled with soot and smoke, crowded slums were the norm in the inner city, and cholera and other epidemics spread quickly due to inadequate sanitation.

These conditions gave rise to modern urban planning and public-health policy, which now must define what “good density” might look like in the future of urban housing. The UN predicts that by 2050, 66 percent of the world’s population will live in metropolitan areas, up from 54 percent today.

Alicia Nahmad, PhD, teaches architecture in London, where she has had a front-row seat to urbanization. Though there are many benefits to people congregating in cities, the glaring flaw, past and present, is overcrowding. “Contemporary cities like London are very productive but also very busy,” she says. “There’s no space for living.”

Each team has conceived a future community type, researched during a recent residency at Autodesk’s BUILD (Building, Innovation, Learning, and Design) Space in Boston. Their designs portend new ways of living and working in cities, where the potential for happy, productive communities is unlimited—even if space is not.

Rent Everything, Own Nothing

One group, Team Dwel.t, pondered that in the age of Netflix, Pandora, and Uber, if people are willing to stream media and share vehicles instead of owning them, would they be willing to do the same with their homes?

The team’s solution is a “rent everything, own nothing” community wherein future residents engage in subscription living. Instead of residing permanently in one place, they’ll have a subscription that lets them float among numerous temporary residences owned and furnished by the same management company.

“Dwel.t believes that architecture has a significant role to play in the building of communities and the sharing of resources,” Bhooshan says. Dwel.t’s shareable housing would be modular and customizable to suit the needs of rotating occupants as they churn through the space. The team is testing digital fabrication of a timber skeleton for the structure, digitally designing components that can be cut out on a CNC machine and then finished by a robotic arm that wraps the skeleton in glass or carbon fiber to create the outer wall of a defined living space.

“They’ve been specifically looking at lightweight interchangeable panels created with techniques like carbon-fiber weaving,” Bhooshan says. “Carbon fiber is strong but lightweight, so you can remove and reposition walls easier than if they were made of concrete.”

The final effect will be the architectural equivalent of Transpose, a modular airplane being developed by Airbus. “Airbus is developing custom modules for aircraft so every flight can be customized to the passengers onboard,” Bhooshan says. These planes could be outfitted with prebuilt modules such as coffee shops, coworking spaces, child-care facilities, and spas, depending on their routes and passengers. “These kinds of reconfigurable modules could be used in housing as well.”

Team Physical.net envisions a shared-housing solution in which networks of people live and work together in the same space in order to drive local economies forward.

“Historically, London used to be a live/work community of artisans wherein synergistic artists and production professionals lived together. Physical.net wants to create similar live/work communities where a tech company, for instance, could be mixed with a prototyping crew,” Bhooshan says.

Such communities could make cities such as London a hub for startups. “The idea is to help cities compete in the global economy by developing small, urban-center-based communities that are highly productive in terms of entrepreneurship,” Bhooshan says.

To promote sustainability, Team Physical.net is especially interested in using 3D-printed clay. “We used to rely heavily on reinforced earth and stone before new-age materials came about,” Bhooshan says. “They’re using materials that are weak but shapes that are very strong, their hypothesis being that the stronger the material is the more energy goes into making it.”

London’s inner city had a population of 5 million before World War II. Its current population of around 3.2 million is expected to swell to prewar levels by 2030. “How do you densify without packing people in like sardines?” asks Bhooshan. That’s the challenge for Team (Dense.com)munity, which is focusing on the design of high-density housing.

(Dense.com)munity wants to house as many as 4,000 people per hectare in areas that currently house only 1,500—without making communities feel more crowded. Its solution uses bent-active splines and textile membranes—tensioned bamboo nodes draped in fabric, then cast in concrete—to turn single-family structures into shared housing. Imagine, for instance, the architectural equivalent of a tête-à-tête: an S-shaped sofa that leverages curved geometry to fit two spacious seats within a singular compact footprint.

“To be able to have high actual density but low perceived density, you need those kinds of complex, double-curve shapes,” Bhooshan says. “Textiles allow you to achieve them.”

Historically, members of London’s upper crust had two homes: a large main house in the country and a smaller townhome for when they had business or social engagements in the city. Team Townhouse 2.0 wants to create next-generation townhomes designed as primary family residences.

Specifically, it envisions “made-to-order” communities. “What they’re creating is an app that’s a bit like Tinder for your house,” Bhooshan says. “You can choose your community—who you want to live with—then order a prefabricated house that promotes [communal living].”

Families who need child care, for example, might form communities with families who need help with meal preparation. The latter could provide shared daycare and would order prefabricated homes with kids’ play spaces; the former could cook communal meals in prefabricated homes with commercial-grade kitchens. “The tagline for Townhouse 2.0 is: Build your community and order your house,” Bhooshan says.

Though the ideas generated by these four teams are just that—ideas—their theoretical research is spawning real innovation. “Reappropriating new technologies for construction creates possibilities that could become core solutions for housing-related challenges,” Nahmad says. One day, these solutions might be used to “hack” residential real estate in ways that transform the concept of urban living. 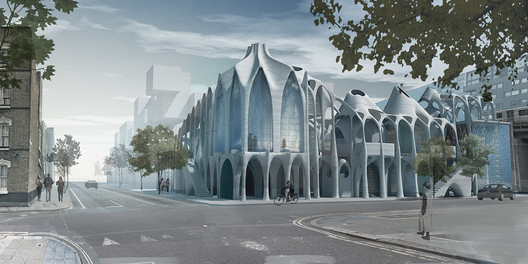