Nearly a year after opening its "Xiamen Bicycle Skyway," DISSING+WEITLING Architecture has won another major infrastructure project in the Chinese city. The winning design, "Xiamen Footpaths," is set to be a 21-kilometer network of paths and bridges creating a large-scale network connecting the surrounding nature and the budding metropolis of Xiamen.

Much like DISSING+WEITLING's "Bicycle Snake" did for bicycles in Copenhagen, the "Xiamen Footpaths" will improve the traveling conditions and city experience for pedestrians in the bustling city of Xiamen.

The footpaths take the city's residents and visitors on a journey through the peaceful mountainside and vibrant cityscape of Xiamen. To address the contrast between the serenity of the natural environment and the hustle-and-bustle of the city, DISSING+WEITLING had to create a "coherent yet flexible design language" that would adapt to the different contexts.

Steen Savery Trojaborg, partner and CEO at DISSING+WEITLING, said of the design, "It will be a fascinating experience to walk among the treetops and see the city and landscape unfold from a new perspective." 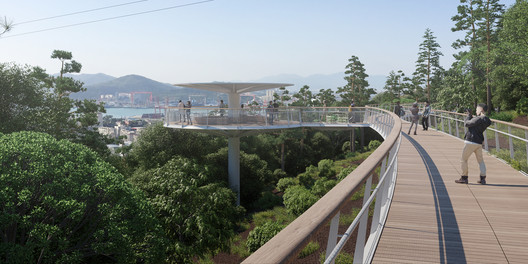