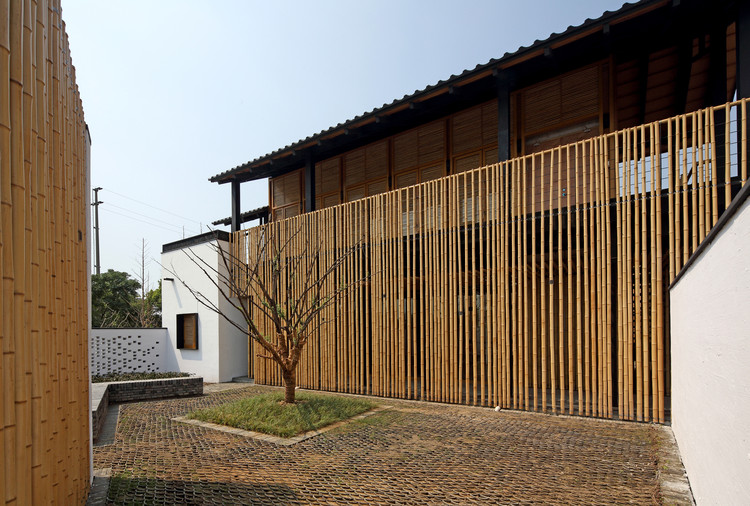 Text description provided by the architects. West Creek Village is located between urban and rural areas of Kunshan city, as well as between the Yangcheng Lake and the Doll Lake, where the Kunqu Opera and Yu Mountain Culture start 600 years ago. However, with the rapid development of urbanization, the rural areas begin to disappear and a new culture park without any villages left is planned.

The local government wants to continue the plan and asked us to design the new buildings instead of the old rural houses. But we persuaded the client that the historical landscape and the villagers should be kept and the traditional culture should be preserved to make the villages revive. The proposal is adopted and a small Kunqu opera school is built over 4 old shabby houses. The opera school can offer a place where children and villagers learn Kunqu opera and can hear the tunes every day, as it might happen days and nights half a century ago.

Bamboo, which represents noble character in Chinese culture, is the most important topic mentioned in the poems of Yu Mountain Culture. Gu Aying described his reading house in his poem “Bamboo grows before the house. Lotus are flapping behind it. Pick the seeds of the flowers in the water. And take a seat in the wind. ” So bamboo is quite an important element used in the project.

The school is a real light building, which adapts to the site densely covered with rivers and it does no harm to the countryside. Small steel columns and beams are used as the wood railing frame architecture typical in southern China. The roof is made of metal tiles and wood sheathings which can reduce the weight of the roof.

The walls on the upper floor are bamboo fiber clip walls with light insulation layer inside ; the walls on ground are made up of light heat-preserved bricks covered by white grass mud. Bamboo curtain walls can be seen inside the yards to create shaoy space and a bamboo pavilion can be found from the riverside, under which is the stage face to the water.

The site is located in the depths of the village and in a river network area with poor foundation conditions. Without using any heavy machinery, the project should be safety itself and to the close neighbor houses, which is only about 1 meter away. The shallow foundation and close columns are adopted for strict protection requirement of the surroundings. All the plants are preserved during the construction process.

The old broken Chinese-style tiles left in the site are collected to fill the metal copings as the local villagers did traditionally. The lights inside the double-layer hollow brick walls can illuminate the paths in the village in the night.

No more artificial design except for the 4 yards is carried out. The 4 yards are named by bamboo, plum, orchid and chrysanthemum. Outside the building, crops and vegetables are planted by the local farmers as their will. The high wild metasequoias and thick beds of reeds are kept as before.

It’s a building in order to improve the conditions for the village, which does well in dealing the relationship between the neighbors, the villages. Because of the light structure and prefabricated constructions, no influence is made to the life of farmers nearby. They worked in the fields around the site in spring and autumn, watching the building growing.

They discussed the style and meaning of such a new house that might change their life and they even attended the design of some details, such as the bolts, the handles and the ridges. By such a small project, the local government improves the relationship with the villagers and strengthens the native culture. 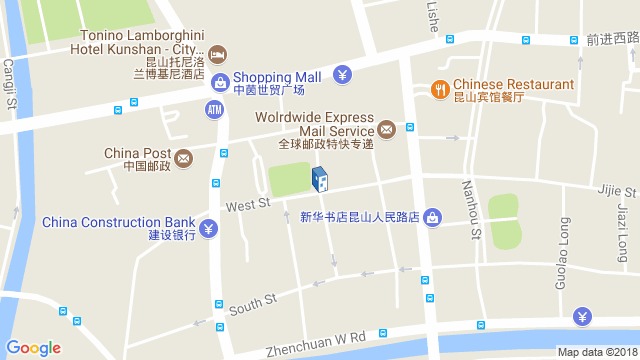 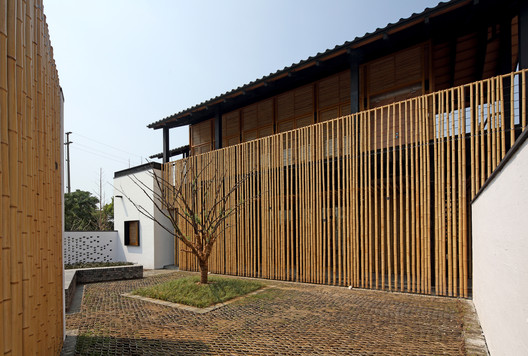