Text description provided by the architects. We would prefer to share the story between us and the farm owner (Mr. Xiong) rather than simplying outlining the design concept to the readers. Nanyao Zui, in Liangzi Lake district of Ezhou City, is the birth place of Nanyao according to the local people. Mr. Xiong who claims to be the descendant of the king of Chu appears to have inherited some of his ancestral craftsmanship.

When it’s the golden time for iron and steel industry, Mr. Xiong built a shaft furnace with about 200,000 red bricks to make pellet (crushing and sintering coal gangue into a ball). Unfortunately, the steel market fell sharply before two batches of products produced and the shaft fell into disuse. Afterwards, Mr. Xiong starts to run this agritainment . And when it comes to the movement of Beautiful Village, he is dedicated to renovate his farm and cottages.

This small village auditorium was born in this context after two years’ construction. We were impressed by the simple form and powerful force of the blast furnace as well as the perseverance of Mr. Xiong when we first arrived at this village. Considering that this "rural industry" reflects the influence of supply-demand relationship between the urban and rural markets on rural industry, and the rugged style of this “structure” also reflects a kind of country aesthetic, we discouraged Mr. Xiong when he was planning to remove the brick blast furnace used as the materials of the reconstruction of Beautiful Village. Its scientific, artistic and historical value are insignificant, which can be viewed as a unique memory and symbol of the village that have endowed it with a special temperament.

The empty space near the platform is used as a distribution square, simply levelled. We adapted our measures to local conditions and planted fruits, vegetables and flowers on theset-back areas to beautify the surrounding environment around the stage. The left corner protruding out of the stage was once designed as a locker room and lounge. However, the performance route is not fluent. we utilize the spiral brick column to lift a tile roof in order to create a raised small stage, responding to the big one. The juxtaposition of different performance spaces is conducive to different performance, which can create a rather dramatic effect. Especially in the village, the small stage can be decorated as the loving netting fibers for the bride in the wedding. What surprises us is that there are a series of country shows being held when we just tided up the stage, including even international country rock concerts.

Flash past half a year, the other side of the blast furnace was still piled up with rusted coal burning machines (which was later placed on the slope for decoration) and various sundries. As the rapid construction of the village, we suggested Mr. Xiong to transform this area into a small auditorium for the villagers or tourists, which could also be a tasteful dining room of his agritainment. What’s important is that the space could also be used by the performers for changing costumes and resting.

It was still a bold red brick, It was still a simple and repetitive form of logic. Seven successive vaults form the roof with the middle one indented, forming a side yard with the retaining wall. Originally, we had already discussed with Mr. Xiong about the construction methods of the vault and brickwork. However, Mr. Xiong, who would always neglect the drawings, adopted the most common red brick erection when he started to construct the vault. We went back to the site again, tried the procedure of Catalonian arch with Mr. Xiong, and then created a hybrid approach, that is to say there are actually three types of masonry on the seven vaults.

According to our request, the pillar-covering bricks couldn’t be built to the top, so that to achieve the effect that we expected of the suspending roof. We jointly selected the location of the toilet. It is separated from the auditorium and connected with the small stage on the other side of the blast furnace by steps. As a result, the space on both sides is naturally connected and vivid.

Mr. Xiong added a love pattern made of wine bottles to our design of the retaining wall construction, I am not sure whether it is a gift made for his beautiful wife, but it’s the “ self-assertions” of Mr. Xiong that make the space have another kind of countryside style. Such a country auditorium does not have large room for party functions as the general auditoriums, otherwise. It creates another prototype by the vague indoor and outdoor spaces, the route and use of performance and viewing space of the stage. 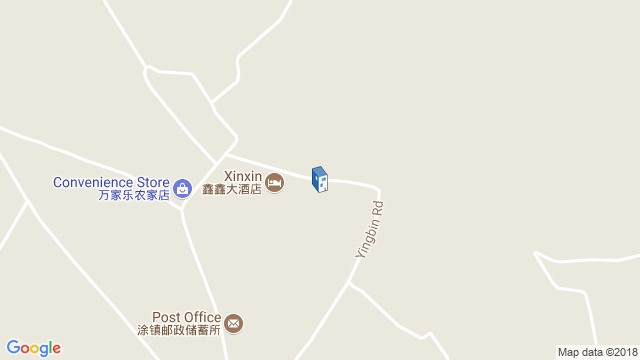 Location to be used only as a reference. It could indicate city/country but not exact address.
Share
Or
Copy
About this office
Huazhong University of Science and Technology
Office
•••
ADAP Architects
Office
••• 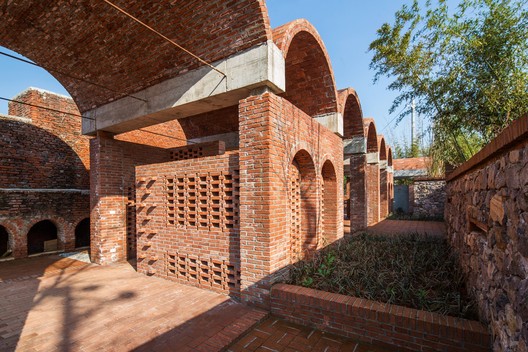