HASSELL has won a competition for the design of the Qianhai Mawan Mile, a business district for the Chinese “gateway city" of Shenzhen. Stretching over one mile (1.6 kilometers), the masterplan seeks to combine “lush parklands, new cultural buildings, and a meandering skydeck” in a vision centered on human-wellbeing. 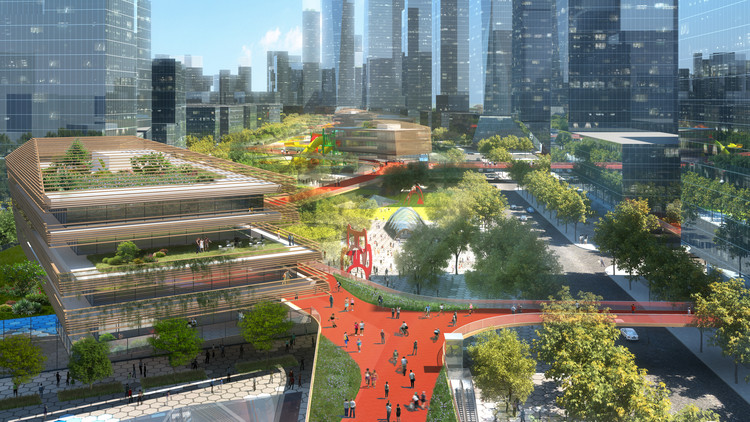 Central to the urban scheme is a mile-long (1.6-kilometer-long) skydeck, envisioned as a “boulevard in the sky” to form connections between the masterplan, surrounding buildings, and a city-wide street network. The deck features an uninterrupted cycling and jogging path, in keeping with the underlying human-centered ethos of the scheme. A major public transport node has been included, prioritizing public mobility over private transport and other infrastructure.

Evidence of the scheme’s human-focused ethos also manifests in a wide range of social activities, with particular emphasis on relaxation. The masterplan’s neighborhood zones feature gardens, children’s play areas, group exercise areas, and piazzas with cafes, restaurants and art installations. Combined with a central, semi-outdoor entertainment district sunken below the Mawan Mile, these attractions offer “a counterpoint to streets dominated by retail.”

At the southern end of the masterplan, a new cultural district comprises three pavilions, each with a form responding to its function and positioning. As well as being appointed design partner for the masterplan, HASSELL will undertake the architectural design of the three pavilions, lending a common architectural language despite their diverse roles as a headquarters building, public exhibition hall, and multi-use cultural building. 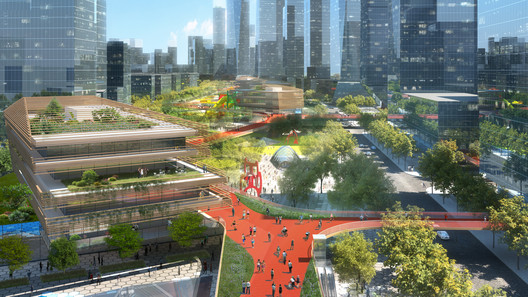