Save
Ortega House / Estudio A0 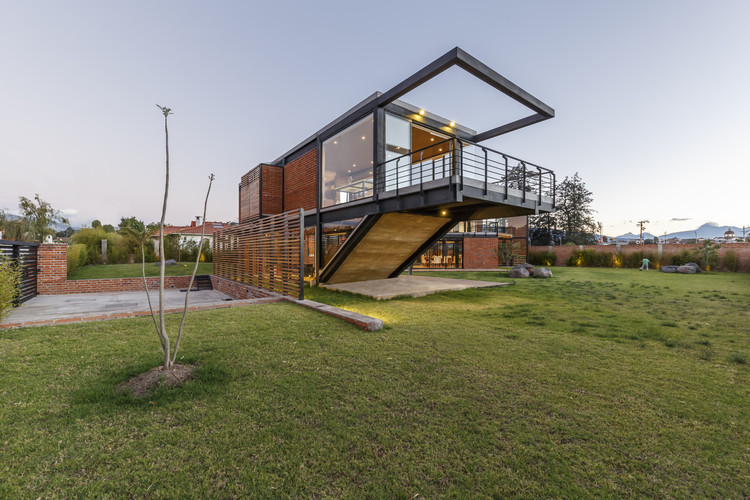 Text description provided by the architects. To design a house for someone is to build a portrait: the portrait of one or more human beings in their relationship with others and their surroundings. Casa Ortega was designed for a devout son. The commission was clear: a home with two pavilions, one for Raúl and his latent family, another one for his parents. Two houses in one: independent and interdependent. Two open links that string together in a horizontal 8, symbol of the infinite, of eternal return. One way to unravel bonds without piercing them is to offer each lace a space for autonomy. The social spaces of the house (kitchen, dining room and main living room) are the place for sharing and bonding. The private spaces (bedrooms, independent living rooms and bathrooms) provide the place for intimacy. The house design resulted, therefore, from the assembly of two pieces of equal size but different scale: a C which would scoop a garden for Raúl and his family, and an inverted C which would scoop another garden for his parents.

The first one would funnel the afternoon sun and would be oriented towards the cordillera that provides the skyline in the horizon; the second one would receive the morning sun and would fold towards the interior. The double nature of the house decanted in a larger footprint for the private area, located in the upper floor. The difference between ground and upper floor was mediated by two inclined planes which provided the perfect opportunity to lodge an escalated library for Raúl, and a cascading inner garden for his mother.

Which would be the adequate materials, the textures for this portrait? Raul manages, with his father, two factories: one specializes in the manufacture of wood components, the other in the extrusion of plastic containers for hospital use. A visit to them was memorable. The wood factory is a well-light and large warehouse built by Raúl. The plastics factory: a chemical laboratory. Casa Ortega had to incorporate an industrial character into its expression. A steel structure and an assembly logic were chosen with this purpose in mind. Raul, though, did not want to live in a factory. He grew up in Sangolquí, not long ago an agricultural valley dotted with brick ovens.

Black bubbles protruding from the baked bricks had provided the calligraphy that characterized walls in the region. His house had to be a hybrid of factory and rustic rural house made of steel, brick, glass, grass and trees (yet to grow). It was imperative to integrate the new house into its context and the future into Raúl´s present.