The Bahá'í International Community has unveiled a proposal for the national Bahá'í House of Worship of Papua New Guinea. In the capital city of Port Moresby, a celebration was held at the temple’s future site to showcase the scheme, coinciding with the Bahá'í New Year. Inspired by the art of weaving, the architects’ vision was for a temple where the people of Papa New Guinea could unite to worship and find inspiration. 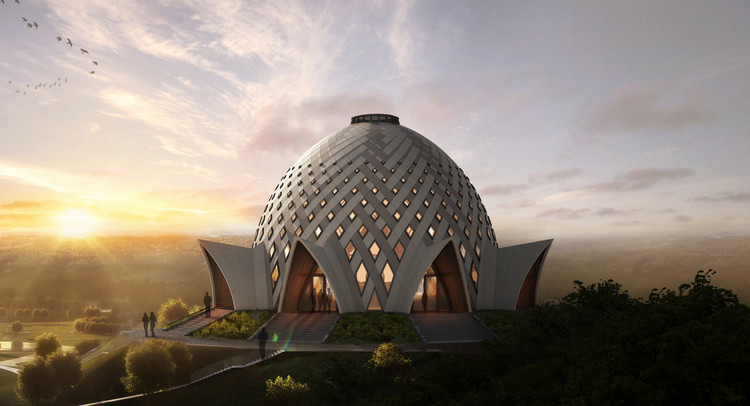 The House of Worship was designed by architects Henry Lape and Saeed Granfar. Addressing the 500-strong audience at the proposal's unveiling, the architects explained the challenge of searching for a universally-resonating theme in a country with more than 700 distinct cultural groups. Reflecting on the abundance of woven objects and surfaces in Papa New Guinea, the architects compared the craft of weaving to the process of building unity, with individual strands uniting to create an object stronger than the sum of its parts.

One subtle image which time and again stood out to us was that of the art of weaving, In traditional village life, which remains alive and vibrant in Papua New Guinea today, and in urban households alike, woven surfaces and objects are found in abundance. It is an image which resonates closely with ‘home’ for many of us, a functional and inherently beautiful art form which we interact with daily.
– Henry Lape and Saeed Granfar, Architects, Bahá'í House of Worship

The temple’s form adheres to the traditional nine-sided shape of all Bahá'í temples, manifesting in nine gable-roofed entrances to a central 350-capacity edifice. The scheme is one of two Bahá'í temples to be constructed in the coming years, joining nine existing temples in Germany, Uganda, Australia, Panama, Samoa, India, Chile, Cambodia, and the USA.

News via: The Bahá'í International Community