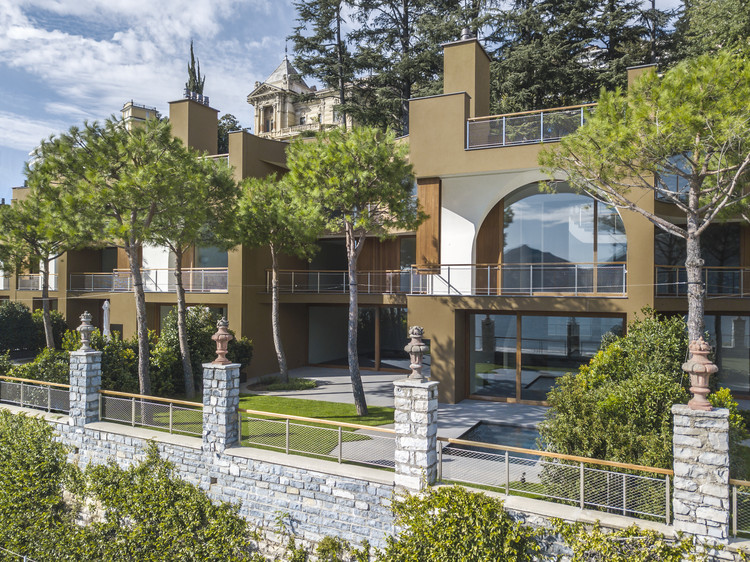 The Villa Favorita in Lugano
The well-preserved gardens of the 17th century Villa Favorita, lining the shores of Lake Lugano at the foot of Monte Bré, are of great historical significance. The 13 romanticist buildings situated in the gardens were erected between 1687 and 1932. Their historicizing style is characteristic of Ticino architecture and, in fact, generally of the villas on the lake shores of northern Italy. Originally, the Villa Favorita was a freestanding, single ensemble of buildings between Lugano and Castagnola. Today it is surrounded by modernist blocks of housing from the second half of the 20th century. This modern architecture is also a typical Ticino style, that emerged in response to the appeal of the Italian-speaking part of Switzerland as a second home and a financial center.

Until recently, the property was part of the Villa Favorita Gardens. A mighty, completely overgrown wall shores up the terrace constructed to accommodate a swimming pool and surrounding lawn. The Casa Glorietta of the 17th century and the Pinakothek, built in 1933 by the then proprietor Baron Hans Heinrich Thyssen-Bornemisza, is located directly underneath the supporting wall. The gallery housed Thyssen-Bornemisza‘s world-famous private collection until it was relocated to the Villahermosa Palace in Madrid in 1990. Carmen Thyssen-Bornemisza, Hans Heinrich‘s widow, sold this property to a Ticino investor who, in 2009, commissioned Herzog & de Meuron to propose plans for apartments. In 2015 Thyssen-Bornemisza sold the rest of the Villa Favorita to a family of industrialists in Italy. The Via Cortivo borders the property to the north. The steep slope, covered with dense, forest-like vegetation, screens the terrace below from public view. The southern side of the property facing the lake is flat.

A Row of Eight Buildings
Eight-row houses of different sizes have been built with dimensions and details corresponding to villas. To maximize the use of the shoreline, they were designed as a single, interconnected complex so that each of the eight buildings benefits from the impressive view of Lake Lugano. Each of the villas is three to four stories high, following the extremely steep topography. Linear, cascading staircases throughout the building allow for diagonal views. The stairs resemble the stepped paths typically built into the slopes of Ticino hillsides. Living rooms and kitchens are placed at garden level; bedrooms with terraces are upstairs. From Via Cortivo, narrow paths and stairs through the dense vegetation of the northern slope lead to separate entrances to each of the buildings. A car elevator accesses the underground garage, where all of the buildings are connected.

Superimposed Geometries
The repetitive basic structure of the project is defined by vertical walls placed perpendicular to the slope. Circular, horizontal, and vertical cutouts are superimposed on this orthogonal order in the form of arches and courtyards. The resulting, geometrically complex spatial fabric creates overlapping inside and outside spaces marked by an unusual play of shadow. The same circular geometry applies to small spaces like elevators and bathrooms. This generates a flowing transition between the larger rooms and a spatial continuum of inside and outside that runs through several stories.

An Architecture of the South
The concrete loadbearing structure has a mineral stucco finish. Teakwood is used for the windows and doors; gardens, terraces, and roofs are paved with stone or planted with greenery. The exceptional layout of the rooms, the beautiful light, and the impressive views are enhanced in the interior by a quiet materiality out of teakwood floors and white plastered walls. The staggered layout and subdivision of the buildings, the brown mineral stucco, and the precise placement of white soffits and reveals within the façade, all contribute to the impression that the new buildings fit quite naturally into the gardens. From the lake, the villas are perceived as an organically integrated structure.

Landscaping
The character of the Via Cortivo has not changed. The large trees were carefully preserved in the course of construction; smaller trees and bushes that did have to be felled have been replaced. As before, a diversity of dense vegetation covers the northern slope, providing excellent screening. Towards the south, the terraces of the eight villas form one large landscaped area, with the individual gardens separated by islands of greenery. The staggered layout of the buildings and the vegetation enhance privacy. Tall pine trees, similar in size and girth to the trees of the Villa Favorita, provide shade without blocking the view of the lake. Landscape architect Michel Desvigne shared the architects’ goal of incorporating the gardens into the overall fabric of the Villa Favorita. 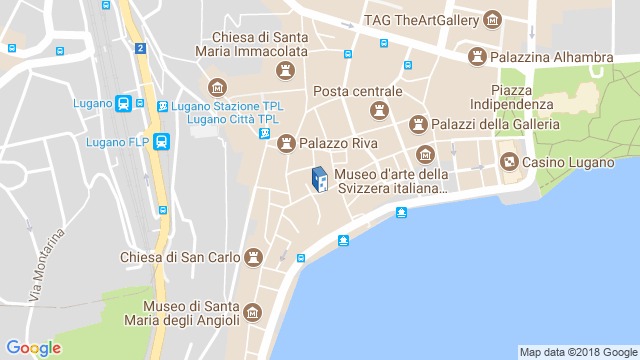 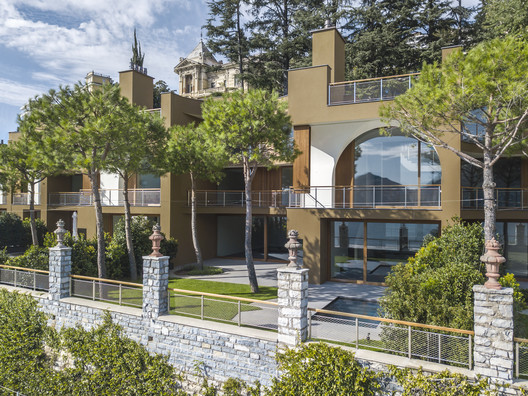