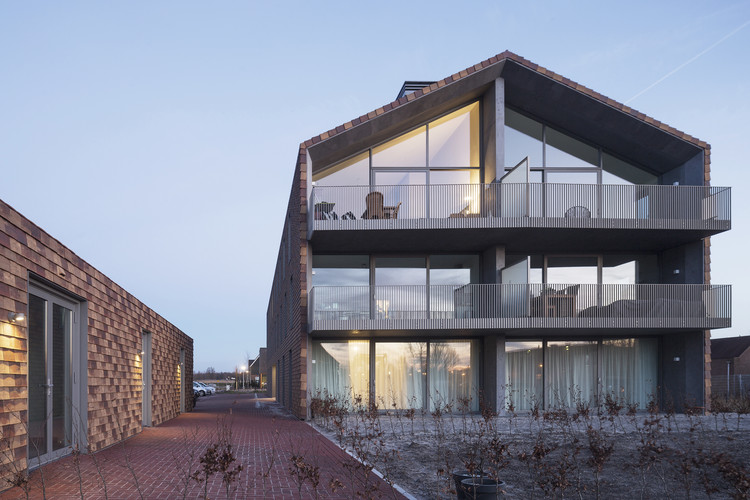 Text description provided by the architects. A ‘residential homestead’ with twelve apartments and a collective garden house has been realized on the site of a former organic nursery of the Cordaan care organization in Diemen. The building site is on the edge of a new residential area that is bordered by sports fields, a railway line, the Weespertrekvaart (i.e. a canal) and the nature reserve along the banks of the river Diem.

For this suburban location, an elongated building volume has been designed with twelve owner-occupied apartments on a collective yard. The design principle has been to produce a volume with a clear relationship with an adjacent monumental barn. To emphasize the idea of an agricultural building, two characteristic design choices have been made. The outside spaces of the dwellings have been laid on the heads of the volume with a fully glazed façade and the building skin is draped over the volume like an omnipresent, more closed ‘cape’. Two chimneys emphasize the rural character of the building volume. Parking takes place on this private property. Furthermore, there is an identical materialized ‘babybarn’ with bicycle storage facilities and a communal garden room, adjacent to the shared vegetable and herb garden. The yard has been deposited to the public road with a red beech hedge.

The aim for the project is a meticulous structural development with a traditional and refined detailing. The façades, the roof and the chimneys are detailed as one continuous articulated casing, covered with French ceramic slates in earthy tones - a subtle reference to the ceramic attributes of the former nursery. The roof surface is equipped with concealed gutters while the rainwater drains are included in the construction of the skin. The building façade is equipped with aluminum windows with turn-and-slide wings to the outside. The frames are encased in sheet steel frames and are placed exactly on slate measures in the façade.

Photovoltaic panels are recessed into the roof surface, with which the building meets the requirements for energy performance. The ends of the main volume are made of dark pigmented prefab concrete frames in which the balconies are incorporated. The slates fold around the beveled concrete frames and thus mark the archetypal building contour. The façade openings to the balconies consist of facade-filling aluminum sliding doors. The cantilevered, slightly sloping balconies are trimmed with a subtle strip steel fence. 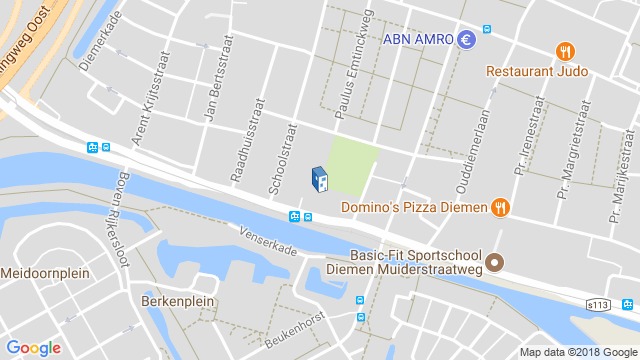