Text description provided by the architects. This is a house where Miesian influence, a fascination for Richard Neutra’s Kaufmann House, and typical Peruvian as well as Argentinian country house style, are clearly recognizable. It is made up of a main gallery, a patio, living and social rooms and the bedrooms, all as open, side by side, unconnected spaces.

Finally, but at the beginning of everything, is the landscape -on which the house is poised like a butterfly in the fields- and which gives form to and mutually composes with the architecture of the house.

The house is made of steel and glass, as well as wide concrete walls reminiscent of tapia mud walls, which counterpoint the house without touching it. Its light roofing gives a frame for the distant mountain and tree views.

The lines created by the house, which resemble planting rows, generate different angled views and landscape vistas from every interior space.

Three intersecting areas make up the house. The first section contains the social area, which has a view out onto the main garden. The second section contains the main bedroom with views of a Japanese style garden, because the owner lived for many years in Japan; and the third section houses the secondary bedrooms and service areas, which look out onto a back garden.

There is a half-moon shaped building in addition to the main areas of the house. It is the security guard’s quarters and its western front is made of gabions which allow for the view, but shield the home from the sunset.

Visual and thermal protection was created with landscaping at the entry to the home, where medium and large trees were planted to the south side, so as to create natural shade and cover to the parking area.

There are different types of vegetation that provide cooling shade for the garden and living spaces, including jacaranda, olive, and Andean molle trees. 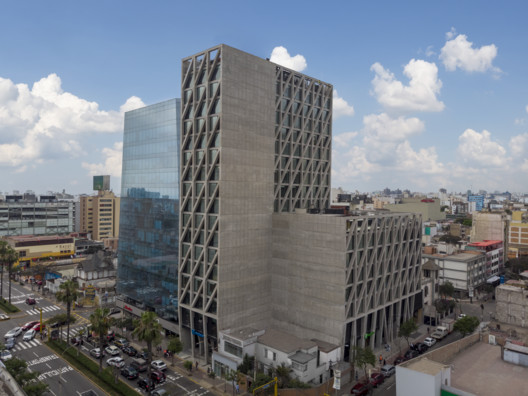