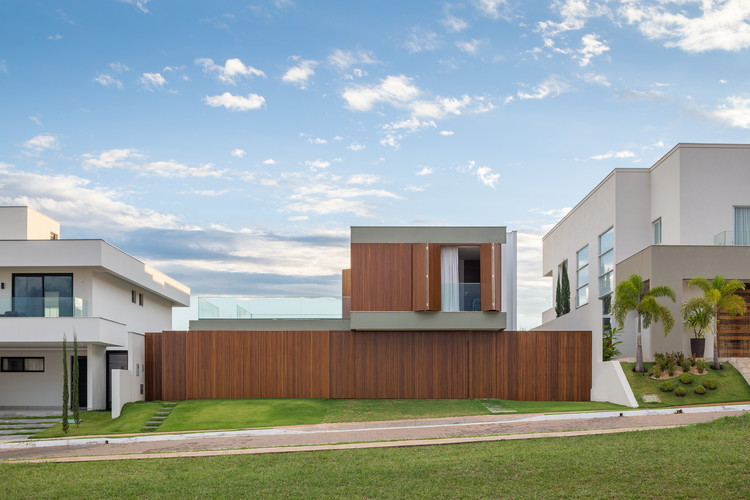 Text description provided by the architects. The residential area where the house MR is located is characterized by a sequence of medium and large houses, the majority of which are located in the front area of the site. This systematic inattentive occupation in relation to the topography and to the scale of a neighbourhood, that is essentially residential, has consolidated a dense building-like structure, very compact in comparison to the other streets of the residential condominium.

Faced with this scenario, we thought that we had to innovate in this consolidated urban context. The idea, apparently paradoxical, of building a house with approximately 600 m² that could be identified not by the grandiosity of its dimension, but precisely by the absence of it, and, in particular, by the discretion of its draw,  was one of the most challenging and appropriate alternatives we came up with. The design strategy was, therefore, directed to electing the void space, the non-built space, as the main element of the concept.

As a mean to reach the pre-defined end, the house was located along to one of the borders of the site in a way to release, in the opposite direction, the necessary area to build in the void, which composes, and articulates with all the activities of the house. The landscape design creates a pleasant atmosphere. Both the social areas, allocated in the ground floor, and the intimate areas distributed in the first floor, were purposely planned to be around this space, the most relevant in its entirety, easily recognizable even from the street. All the delimited spaces open directly to the void as if they were part of it.

The limits between the exterior and interior are subtle and lightly delimitated by the doors and windows frames. The spectator’s view easily passes through every place in the house, while being assisted by the constant sight of the landscape area, which functions as a spatial and sensorial orientation reference in relation to permanence and displacement within the house. The understanding of the space is also composed of the visual permeability generated in part, by the integration.

The topography was carefully modified to establish a consistent tectonic relation between the built object and the site. The house sits gently on the site. So, through delicate changes and sections in the topography of the site, a very honest and harmonic dialogue was established between the building and the site. This corroborates with a definition of the house proportions that are appropriate to the scale of a residential area. The intention was to establish an easy way to read the architectonic language. Simple and over-layered volumes, carefully located at the site, define the residence’s spatial composition. 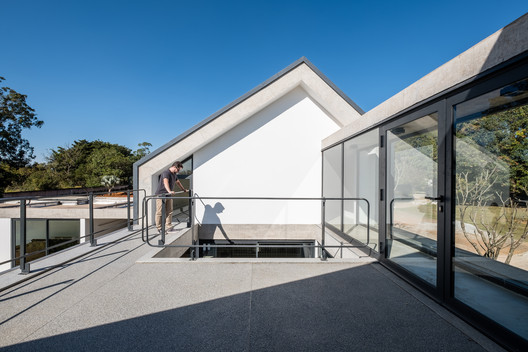