Save
See the Progress of Zaha Hadid Architects' World Cup Stadium in Qatar, Set to Open This Year
Share
Or
Copy

When complete, the 40,000-person-capacity stadium will feature a retractable roof (able to be closed in less than 30 minutes) and a wide range of community spaces and amenities – including schools, sport courts, restaurants, retail stores and even a wedding hall – that will allow the complex to be used into the future.

Learn more about the design of Al Wakrah Stadium, here.

The video was released as a full construction update from the Supreme Committee for Legacy & Delivery. Check out the progress of several other upcoming world cup venues, here.

New details have emerged on Zaha Hadid Architects and AECOM's 2022 FIFA World Cup stadium in Qatar. Scheduled to begin construction in late 2014, the 40,000-seat venue pulls inspiration from a local fishing boat - the Arabian dhow - to influence its overall design. 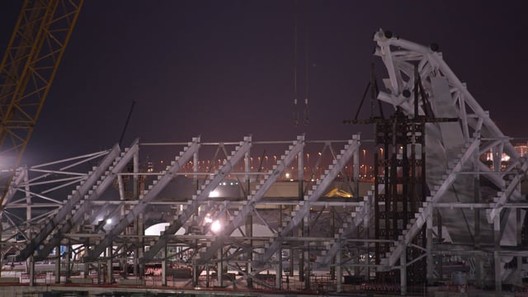