Seeking to combine traditional education with the responsible use of resources and the development of sustainable human relations, the first sustainable public school in Latin America was created. Designed under a constructive method developed by the North American architect Michael Reynolds, who has now built such schools around the world.

The 270 square meters building is on the coastal portion of Jaureguiberry, Canelones and was raised in only seven weeks. Its construction is made up of approximately 60% recycled materials (covered with plastic and glass bottles, cans, cardboard) and 40% of traditional materials. 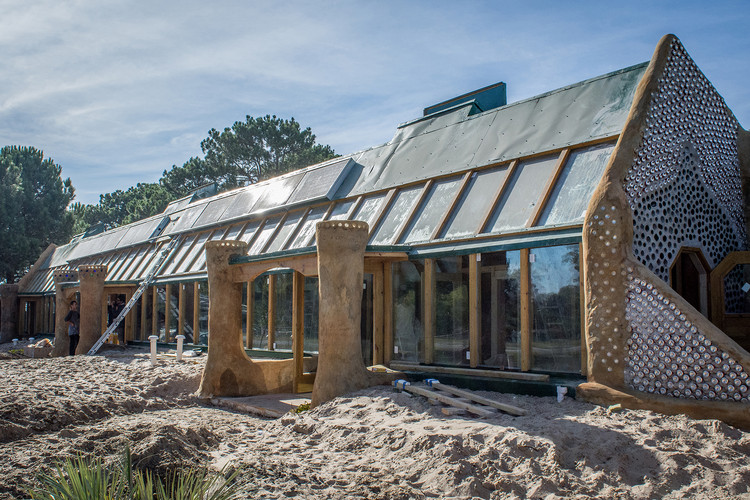 From the architects. The Earthship, as Reynolds calls it, seeks to make the most of the energy of the sun, water, wind, and earth. To do this, the surroundings are sensitive to the orientations, opening to the north to make the most of light and solar energy through a wide glass corridor that acts as a distributor of the three classrooms and two wings of the school, projecting to the exterior a simple and forceful facade dominated by glass and wood.

The north corridor, in turn, enables the production of food through an interior garden. Electrical energy is generated from photovoltaic panels and a central energy storage.

To the south, the building is enclosed with a thick retaining wall made of roofs filled with sand and compacted gravel containing the sand and earth slope at the back of the building. This strategy, in addition to increasing the thermal inertia, allows covering the whole system of reserve and collection of rainwater coming from the cover, besides implementing a sequence of tubes that from natural convective processes, generating cross circulation of fresh air in the summer through the classroom. In winter, the pipes can be closed and the heat generated by the greenhouse effect of the north corridor allows air conditioning in the classrooms.

In addition to being self-sufficient in its energy production/consumption and boosting the organic production of food in its interior, the sustainable school uses rainwater for human consumption in the sinks, irrigation of the vegetable gardens and finally to the cisterns. The school also counts on a process of treatment of black water which includes a septic tank also created with recycled materials (in this case tractor coverings) and a wet zone on the exterior of the building.

The constructive strategy involves a mechanism of social participation that, in addition to making possible the construction of the school in a shorter period of time, seeks to transfer the knowledge of the system used and strongly involve the local community before, during and after the completion of the works. More than 150 people participated, including volunteers, students from Uruguay and thirty other countries.

The initiative comes from Tagma, a national non - profit organization and was supported by ANEP - CEIP, Canelones stewardship and by public and private companies that made its execution possible. For more information click here. 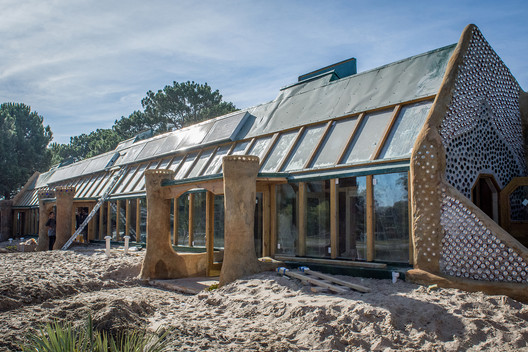