Apple’s unwavering love for glass and seamless edges is one of the reasons designers flock in masses to purchase their products. But that aesthetic has caused a bit of a snafu at the company’s new Foster+Partners-designed headquarters in Cupertino, where employees are running into the highly transparent glass walls at an alarming rate.

According to a report from Market Watch, there have already been at least two incidents of people injuring themselves badly enough that local emergency services were needed to be called. Both cases resulted in minor cuts and bruises but ended up not requiring hospitalization. Other sources have claimed that seven people reported injuries on the building’s first day of use, with speculation that even more incidents have gone unreported.

A follow-up report by Bloomberg claims that some staff members had begun to use sticky Post-It notes to mark the locations of glass doors, but were asked to removed them as they detracted from the building’s aesthetic.

The Apple Park campus features an abundance of glass throughout the building, including 45-foot tall safety glass walls, glass-walled work “pods” and other glass barriers. The work pods are said to have been the brainchild of Apple co-founder Steve Jobs as a way to mix individual workstations into larger social areas.

In California, workplace safety involving potentially dangerous transparent barriers is mandated by law, stating that “employees shall be protected against the hazard of walking through glass by barriers or by conspicuous durable markings.” If Apple is found in violation of this law, they could be required to install demarcations to increase visibility. 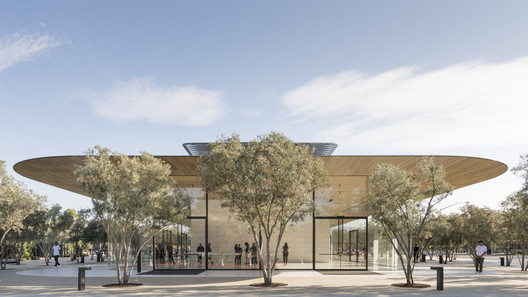