Save
The Case For A Smaller House: Talking Clients Out of The Big House They Want to Build
Share
Or
Copy

As architects we are often conflicted: what do we do when we have clients who want really big houses, houses that by any measure surpass anything they could really need? How do we walk them back from the idea that they need 3,500 square feet of home for a family of four?

On one hand, we want to design it for them. In fact, a bigger project keeps us employed and financially solvent much longer. On the other hand, how do we reconcile that with the idea of sustainability and the architect's responsibility to promote it?

To complicate things, builders don't want to build small houses, either. The smaller the house, the harder it is to find someone reputable to construct it. I have worked with contractors who won't even consider projects that are under $2 million.

I don't know why we as Americans feel like we need an excessive amount of space in order to survive and live comfortably. I have designed homes for people with rooms I know they will never use. Yet, they still have to maintain it, heat it, cool it, etc. In other words, the costs don't end with the construction.

Every time I've tried to talk a client out of building a bigger house, I have failed. I've been removed from the discussion by the partners of the firm, or when I am working on my own, my potential clients turn on their heels and run to another architect. I have learned: You either give a client what they're asking for, or they find someone who will.

My clients are often conflicted. I can't tell you how many of them have asked me for a massive home and then announced that they are "very environmentally conscious," so they want me to fill the place with bamboo floors and cabinetry. They may even want to throw a photovoltaic on the roof for good measure.

I point out that there aren't any bamboo groves around us, and that while this material may grow quickly, it does so in China, not in New England. I go on to argue that the bamboo is grown, cut, processed and packaged in China where the labor and environmental laws are lax, to say the least. Unfortunately, by the time I am able to communicate this to them, I may have lost the project.

Americans have a distorted sense of how much space they "need" to live and be happy. As someone who has lived with his wife, two young children and a big, goofy Weimaraner in a 750 ft.² third floor flat while the bottom two floors were under renovation, I know personally that if a home has been thoughtfully designed and spatially organized, it can feel much bigger than the square footage would have you believe. I've told many clients that I can design a 1,000 ft.² home that feels like a 3,000 ft.² home and will have all the space they need to feel unconstrained. Some of my clients bite, others do not.

Often times it doesn't occur to my prospective client they don't need different spaces for different activities. There does not have to be a singular living room, a singular den, a singular playroom, singular guestrooms, a singular office, etc.

My clients aren't architects. They either do not like or do not initially consider the concept of spatial overlap: the idea that one space can perform multiple programmatic functions.

I recently had a client insist that she needed a separate painting studio for the home I was designing for her. The budget was tight, but she wanted this new home and studio to be built at over 2,500 ft.² The builders with whom we had met all told her to get comfortable with some compromise, because at $325.00 ft.² to build (that's the starting going rate for new construction in my neck of the woods) the house she wanted was headed way over $800,000.00 and she had a budget of $250,000.00.

Needless to say, upon seeing these figures, she became despondent. I did not.

I prefer designing smaller, more compact homes anyway. Designing smaller homes is more challenging. It forces you to edit and be reductive. It requires you to eliminate the superfluous, leaving only that which is necessary.

I suggested that we build her a singular "loft" like, 800 ft.²  building in which the studio space could also triple as a dining room / living room space. This would give her the opportunity to have dinner with and entertain her friends in the middle of an art filled, real-life working studio.

I described to her how my wife and I had lived in just such a space before we had kids. I told my client about the dinner parties we use to have for my wife's friends and colleagues. I described, both verbally and in drawings/ sketches, a space that would have her large paintings, in various stages of completion, leaning against and/or hanging on the walls or propped up on easels. Her clay sculptures, both finished and in progress, would quietly reside on pedestals throughout the space, and preside over her guests as they mowed down on her freshly made pasta. I tried to help her visualize an art-filled space, the floor beautifully splattered with colorful paint, at the center of which would sit a large steel dining table that would be her primary horizontal work surface when she was not entertaining. Imagine the conversations this would spark! People wouldn't have to go to a stuffy gallery to see her work. Instead, they would spend their evenings within the studio itself. I pointed out, she might even sell work out of it!

But she simply couldn't get past the size of it.

To insist someone just get rid of a life's worth of stuff is a big ask of anyone. We all accumulate artifacts over the course of our lives, and these things are the physical manifestation of our history. How do you just abandon them?  Some people have no problem letting go. Others have difficulty but manage. Still others, like my client, just can't.

At the end of the day, the project languished and died. It was expensive to build, and she couldn't bring herself to spend a quarter of a million dollars on a home that was a third of the size that she wanted.

I spend a lot of time just trying to educate my clients on how much it costs to build. Right now, almost 60% of a residential building's cost goes to cover labor. I built a house recently that came in at $385,000.00. It has a whopping 1,200 ft.² Doing the math, this amounts to about $320.00 ft.² not including architectural or engineering fees, which in this case amounted to about 8% of total construction cost. Of the $385,000.00, just over $150,000.00 went to materials. The rest was all labor, profit and overhead. A good electrician charges around $120.00 per hour for himself/herself and an apprentice. A good plumber/pipefitter charges about the same. All the trades have there own labor costs, but nobody qualified and good gets less than $40.00 an hour these days.

So that's it in a nutshell. People that build your homes have to live. To keep costs down, I’d encourage clients to be less rigid, to think of spaces performing multiple functions, and to come to the design process with an open mind. It is only realistic. 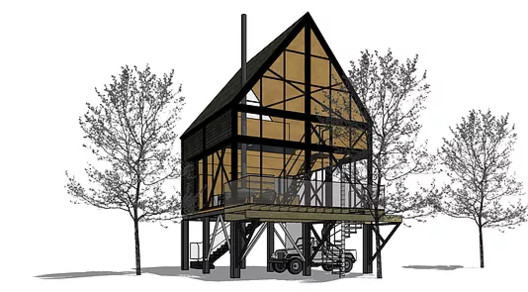