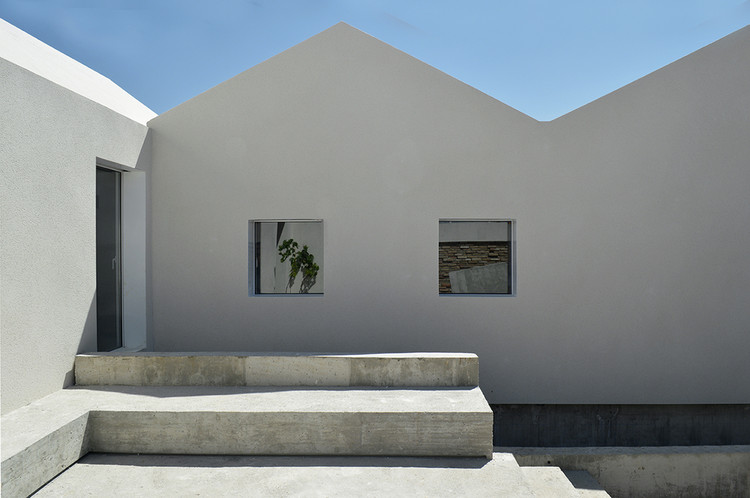 Text description provided by the architects. ABAL House-Studio aims to establish a relationship between home and work, where all spaces are useful, complement each other, form a whole, and at the same time have their own identity.

In a residential environment close to the historic center of the municipality, the project reverses the idea of housing as a forceful central mass and offers instead a central void, where the house looks inside, it is understood from the patio, something so important in the Andalusian architecture and that with so much excellence is shown in the Alhambra, its palaces surrounding each patio, the nature integrated in harmony, the water that crosses and crosses the spaces, the way to gradually enter from the public to the private, the nuance of light and shadow.

These basic principles for any building, together with the good orientation of each room, the cross ventilation, vegetation that offers shade in summer and sun in winter, increased by contemporary construction systems such as geothermal energy and external insulation. of facade, which is applied here even on deck, are what give this result.

The architecture of the environment is not relevant, they are isolated detached houses of 2 floors + attic that exhaust their buildability as if there were no tomorrow, houses where whole plants are in disuse; It would be good to apply there issues such as sustainability, energy efficiency and respect for the solea-ment of neighboring homes.

ABAL House-Studio has an area of 130m2 on a plot of 450m2, it has been tried to adjust the measurements of each space for the people who will use it, taking into account that excess built m2 is an economic and Innesario resources, and so take advantage of the limited budget for constructive improvements in insulation and air conditioning.

The site until 50 years ago was an old era where cereal was threshed and that maintains its topography practically unaltered thanks to the fact that it has a large part of rocky surface, which is shown and disappears creating suggestive reliefs. The project integrates both the patio and perimeter areas that stone surface of the land.

The house adapts to the land and with very little movement of land, comfortable and functional vertical relationships are achieved. The construction is carried out by means of a "skin" of continuous insulation, both on the roof, façade and floor. For this purpose, the "SATE" system is projected, which provides exterior insulation of 15 cm, which is placed on 20 cm thick reinforced concrete slab walls. This system, used both in facade and roof, according to the manufacturer's data, is the first time it is done, providing an innovative solution. In addition, the air conditioning is made by geothermal energy, obtained through a well of 100m deep that make the project an energy reference for the municipality.