In May 2017, the Chilean firm ELEMENTAL was chosen to design the Art Mill, a cultural center that will be one of the largest in Qatar and will share a neighborhood with the Museum of Islamic Art (by I.M. Pei) and the National Museum of Qatar (by Jean Nouvel). Organized by Malcolm Reading Consultants, the final verdict closed an exhausting call that initially received 489 proposals and extended for two years in its four phases.

After making a trip to Doha (Qatar), Alejandro Aravena spoke with Chilean newspaper El Mercurio and shared details about this project. "One of the things we set out to do is to make this endure for the next 1,000 years," explains the 2016 Pritzker Prize winner. "When you look at industrial facilities, especially silos, archaeological ruins are the kind of things that remain," he adds.

At the time, the jury described the winning proposal as "serene and austere". In this regard, Aravena comments:

One of the greatest satisfactions is that they have understood the project, which on the one hand is monumental, enormous, but in spite of the monumental scale it has to be a calm project.

On the other hand, institutions like Human Rights Watch and Amnesty International have shown concern about the working conditions of migrant workers in Qatar, with the construction of the stadiums that will host the 2022 World Cup as an example of this. In this regard, Aravena clarifies:

One of the issues that was part of our proposal was not only the design of a building, but how it was built. What will the conditions of the workers be like for example. Before we won the contest, as part of its 2030 national plan, Qatar made a declaration of labor rights and our proposal fell into a policy that had already been declared by that government.

Art Mill will have a total area of 85,000 square meters and ELEMENTAL leads a consortium that integrates SBP (structural engineering), Transsolar (geoengineering) and the Canadian consultants Stantec.

So far, Art Mill's budget and construction deadlines have not been disclosed. 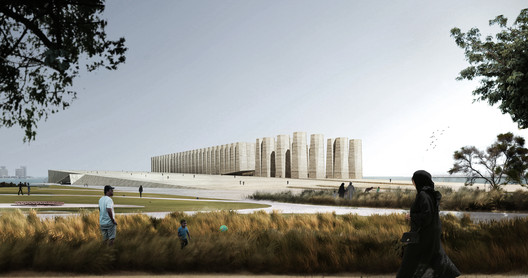