The 2018 DAM Preis for the best building in Germany has been been awarded to bogevischs buero and SHAG Schindler Hable Architekten for their visionary residential housing project wagnisART in Munich. Selected from a list of 4 finalists, the project was lauded by the jury for setting new “social, architectural, and urban planning standards” in becoming a model for future residential housing projects in Germany.

The DAM Preis for Architecture in Germany was established by Deutsches Architekturmuseum in 2007 to honor outstanding buildings in Germany. Previous winners of the annual award include the European Hansemuseum in Lubeck by Studio Andreas Heller (2017), the renovation of the Neues Museum by David Chipperfield Architects (2010) and the Kolumba Museum by Atelier Peter Zumthor (2008).

Learn more about the winner and see a selection of shortlisted and finalist projects below. 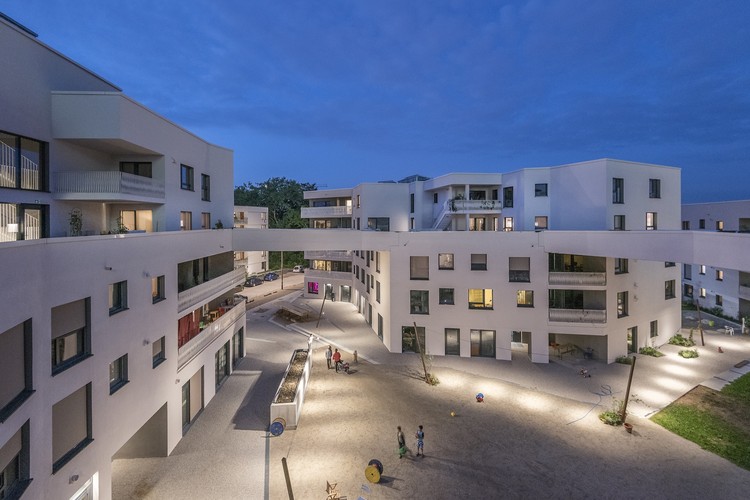 Description via DAM
Who wouldn’t want to live this way, especially in a large city like Munich, infamous for its ruthless housing market? The best way to experience the array of different spaces in this development, comprising five irregular buildings arranged around two courtyards, is to stroll through it on two levels. On the ground level, widening paths and two courtyards connect the individual buildings. Meanwhile, bridges connect the third and fourth floors of the different sections, adding an extra layer of charm to the site.

WagnisART was created as a result of a struggle against an existing development plan. In 2002, the practice Ortner & Ortner Baukunst planned to build three rectangular buildings arranged in the shape of a “U” at the same location, as part of a master plan for DomagkPark, a new district that was created on the site of the former Domagk barracks. But the future planners secured an exemption from the orthogonal master plan and were approved to create their own independent development.

The architects encouraged the future residents to participate in the planning process. This design method challenged the autonomy of the architects while enabling them to fully address what the future inhabitants wanted. At the beginning of the planning stage, the future residents presented large models during workshops to express their desire for a courtyard and above-ground structures connecting the different sections of the complex. It is clear that the cooperative obtained the communal architecture it wanted. The niches and small squares on the roof terraces and in the spacious stairwells are popular gathering spaces. And the residents have embraced the many communal spaces, which include art studios, work spaces, a laundry room, a sewing room, a children’s play room, rehearsal and function rooms of various sizes. A communal restaurant has also been added to the amenities.

The cooperative offers flats of many different sizes as well as a large number of financing models. 30 percent of the flats are subsidised and 40 per cent are offered as part of the München Modell, an initiative for middle-class families with children. The cooperative also offers flats for the free market. All residential units are furnished identically and are distributed in the buildings in such a way that no subgroups can arise based on income. Also 53 one-room flats with individual bathrooms and kitchenettes and shared living space and terrace which form eight apartment clusters are included.

The exterior design of the buildings was the one feature of the former development plan that needed to be retained. The façades are plastered and painted in beige-grey colours that fit in with the surrounding environment. However, wagnisART was still fitted with eco-friendly building insulation. The load-bearing structure of the building is a reinforced concrete skeleton structure; the outer walls primarily consist of a wooden frame with a curtain wall façade. Housing development projects in Germany will have to follow the lead of wagnisART in the future. The jury members were extremely impressed after their visit to the site and are very pleased to award the 2018 DAM Preis to wagnisART.

Caruso St John Architects has linked an old and a new building in the center of Bremen for the head office of Bremer Landesbank (BLB). The extraordinary clinker façade with expressionist motifs is representative and at the same time, through its detailed elaboration, makes reference to the historical development of the surroundings.

On the outskirts of Augsburg, Knerer and Lang Architekten had a more prosaic task to do. They gave a combined recycling and street cleaning depot an unusual dress with two faces: on the outside, the U-shaped building with a serrated roof is wood-clad, inside the metal shell shines in Olympic blue.

In Friedrichshafen, in turn, the new main campus of Zeppelin University was a symbiosis of old and new. In the courtyard of a former barracks, as-if Architekten created a flowing structure that complements the existing building with a variety of open and semi-open spaces and an attractive roof terrace.

A Selection of Shortlisted Entries

See the full shortlist and all of the nominated projects here. 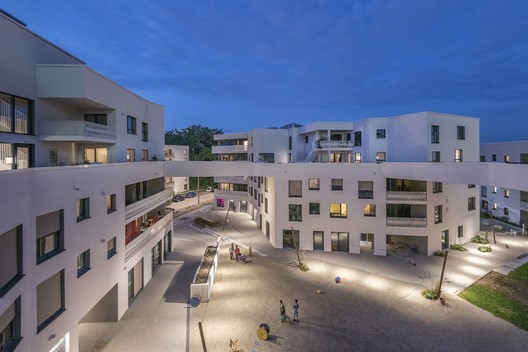