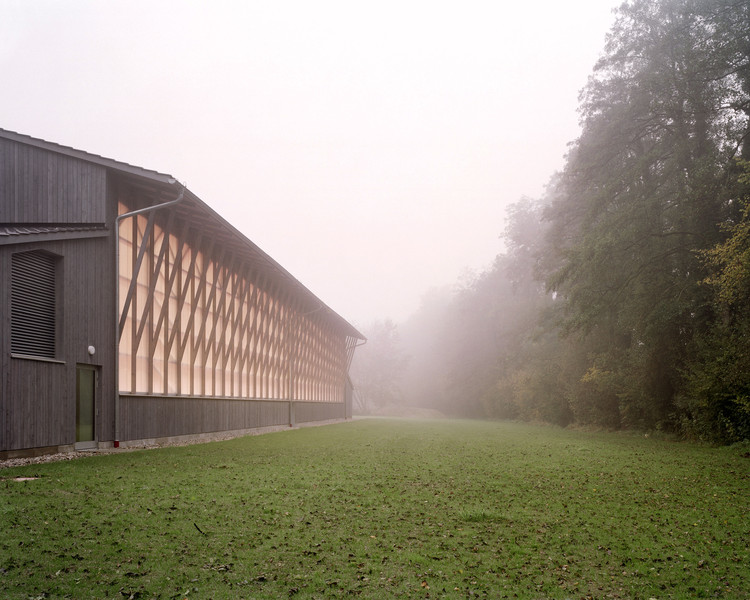 Text description provided by the architects. Haiming, a village with almost 2000 inhabitants lies at the meeting of the rivers Inn and Salzach. The natural environment of both rivers, their valleys and meadows, characterise the landscape of the Niedergern. Rare bird species nest and breed in the nature reserve "Unterer Inn" and numerous beavers do their work. In the west of the village, behind the cow pastures and the forests, you can see the smoky chimneys of the nearby industrial area with its refineries and chemical plants. The design for a new club sports hall for SV Haiming also results from a similar ambivalence of "values". Despite many built banalities the village centre is still intact. The urban setting of the new Sports Hall refers to this harmonious frame of reference. It follows the primacy of restraint and subordination. The play with banality actually is even the starting point of the design. Construction wise, but also on an architectural and formal level, the hall seems to be taken from the catalogue of local timber construction and precast factories.

It refers to the cheapest and ignoble means of joinery – to the galvanized gang nail plate and corresponding binder and wall systems. In the sense of a spatial framework – which it actually isn’t – the roof construction creates the image of a filigrees surplus of supporting elements. On the other hand the posts, bars and diagonals are appropriated as large wall graphics. The breaking of the rule, as in the case of fat, sculptural-formed concrete beam on the inside of the south wall and the merely suspended prefabricates columns on the outside, are just as important as the rules and their formalisms themselves.

The direct catchy image of a structure vs. a sort of vagueness of what is truly load bearing and what is only an image of it. This ultimately results in a tension in contrasting pairs such as forced banality vs. a romantic scale on the outside and constructional pragmatism vs. "heroic" exaggerated construction on the inside.

Product Description. We wanted to fulfil the explicit wish to build the sports hall as cheap as possible. We tried to interpret this (restraining) fact as a design freedom. So with great pleasure but with extreme discipline at the same time we were searching for possibilities of undermining the standards of a common and usual sports halls. This is also the beauty, if the standard is not applicable, because then the building would be too expensive. Then one cannot fall back on it. If this had not been the case, the hall would probably look like many others. Therefore we have used a kind of transfer of technology by using a timber construction system that is usually not used for public buildings, but mainly for agriculture buildings or for discount stores such as Aldi or Lidl: the galvanized gang nail plate. This is the cheapest and ignoble means of joinery. And with their corresponding binder and wall systems we tried to create a kind of a spatial framework – which it actually isn´t – but the roof construction creates the image of a filigrees surplus of supporting elements. On the other hand the posts, bars and diagonals are appropriated as large wall graphics.

We wanted to create the “feeling” both of an ideal or even heroic space and of a very functional even relaxed space – just for doing sports. So we admit that we tried to create a kind of sacred space dealing only with structure and light on the one hand … But we also tried to avoid the consequences of such a space and atmosphere. So the user should of course not be irretated in practicing sports. The sports hall therefore is a very robust space. We try to achieve this by the staging (Inszenierung) of the selected structure and, in particular, by the north wall with its polycarbonate elements in front of the structure and the light incident filtered through it into the hall. And on the other hand, by using very robust materials and simple details, and also by a culture of the raw / simple. 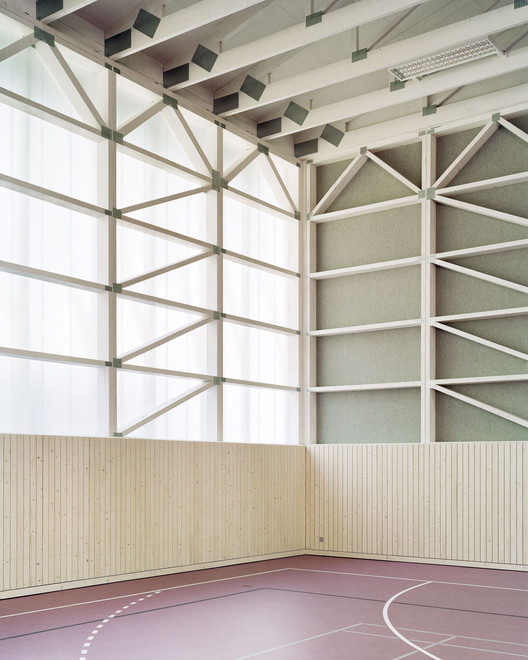 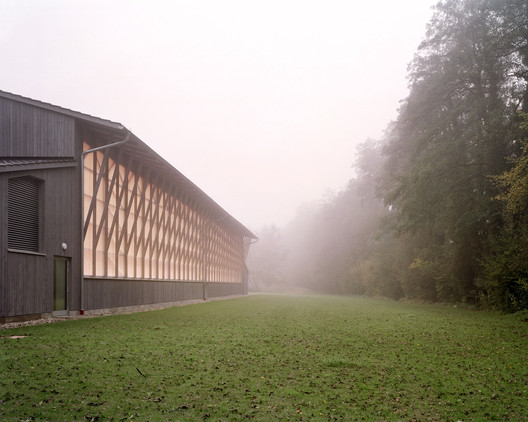