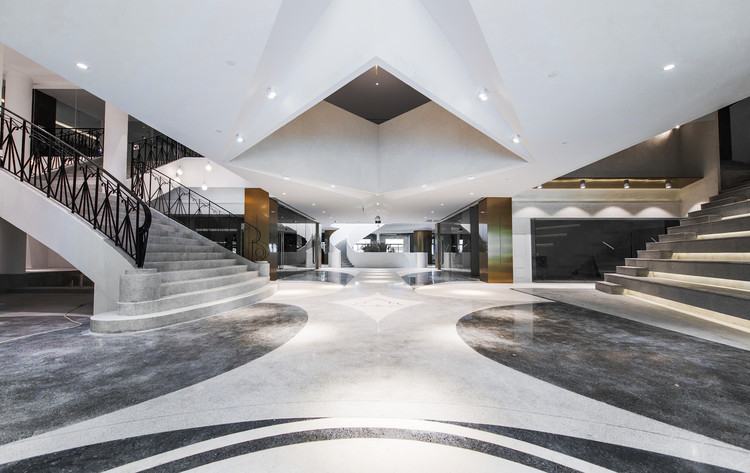 Text description provided by the architects. Fuxing Park locates in the north of Middle Fuxing Road, shaded by oriental planes, while Roarc project “WE+lab” starts in the FUXING Plaza, an old three-storey building that seems to be out of place amongst the French garden. Our challenge lies in how to elegantly blend the project in the French grace and romance of the Fuxing Park.Stepping once again into this park, Roarc team was overwhelmed with the astounding characteristics of the French garden: axis, axial symmetry, gridding, patterning, as well as the beautiful flowers, planes trees, pavilions and ponds. Our team determined to salute the only French garden with our design.

Since the beginning of its construction, Fuxing Park has been recording the development of Shanghai’s lifestyle. Its early stage and present condition reflect a collision between history and future. The “re-shape” of FUXING Plaza now is more like a seed planted in the earth; only with a review to the past and a foresight into the future can it become more integrated. Taking this into consideration, Roarc team extracted the elements “jollification” and “site” for image patterning at the WE+lab entrance. The team applied the shape of plants in the garden for the floor pattern, and used lines and numbers on the handrail to correspond with the classic Greek columns. The architectual storytelling expressed the design rationality. The design is a continuation and commemoration of history, a field spirit, and also an enrichment of culture. In the axial area, Roarc team used only the skeleton and branches from French planes, the most representative of local trees, as guides along the path; the team also abstracted the floral pattern, aiming to elaborate the natural state of growth and maturation.

Cities change and develop, what is the way for the old ones to be reborn? RoarcRenew’s design goes deep down into Fuxing area to excavate and continue culture and humanitarian connotation in Fuxing area, transforming it again to a center of culture, art and social activity.

The project of WE+lab FUXING Plaza locates in the north of Middle Fuxing Road, next to the boulevard to the east of the sinking garden in Fuxing Park. The architecture is former Cashbox Party KTV, which had kept the youth and shared memories of local people in Shanghai. This project is to convert it from the original entertaining form into a creative furniture display business format and co-working space.

A. BOULEVARD
Roarc team’s whole design idea centered on the concept of “fracture” long before the design concept had come into being. The goal was to meet the demand of adequate business display space as well as orderly maximize the visual area in stores. For the visitor flow, Roarc’s design changed the original layout and manifested the new space logic with the idea of “boulevard”, i.e. the central axis started from the architecture and extended along a straight line, and the rest parts were arranged symmetrically to this line to deconstruct and reestablish the space. The design followed the original central axis in the park, but also broke the randomness with the “boulevard” across the interior space and the landscape, to fill the project with new atmosphere. Our goal was to continue the integrity of the building and its atmosphere, grant everyone direct visual sight from the main entrance to stores, and maximize clients’ profits.

B Field Spirit and Cultural Circumstances. Boulevard, French romance.
The French word “boulevard” originates from “bulvaerk” in Danish. “Bul” means bole and “vaerk” work; the both parts combined mean a fortification built with boles. The top is used as walking area. In some places, builders demolished the fortification and built a wide path. The French adopted this word, only to change its spelling to what is known as “boulevard” now. Later, this word is generally used to refer to wide streets with trees on both sides.

Roarc team found it appropriate to infuse the idea of “boulevard” to this project. Looking from urban perspective, the project’s interior space was no longer simply an indoor area, but a spacial form needed to be presented as “landscape node”. RoarcRenew intended to continue the indoor axis as an extension to the outdoor landscape axis in Fuxing Park, exactly as Tuileries Gardens in front of the Louvre, which is an extension of the French royal spirit. The space in this project is also a continuation of the stories in Fuxing Park.

Roarc team analyzed the park and found its original planning had been an organized geometric grid with rigorous order and clear subordination, simple style and graceful solemn. Key decorations spread over the central axis (the boulevard), easily seen at the parterre, such as the lattice wall, the fountain, the hedge and sculptures. The paths had strict classification as well. Taking this as the direction for interior design, RoarcRenew applied the key elements to indoor area to explore the boundary between the inside and the outside. During the exploration, Roarc team experimented with pattern design, interior landscape build and visualizational decoration, based on the support of landscape and gridding classification. This is not only a dialogue between the inside and the outside, the new and the old, the modern and the contemporary, but also the shaping of the space wholeness. Deep under these research and “design”, it is not pandering, nor a materialized carnival; but a search for traces of the culture. What can the space offer? What does it resonate? Whether the “history” left behind and the “new story” are able to respond to the unique urban culture? The key to the Urban Renewal lies on whether the “New” urban culture can be accepted by the majority, which is also the core of field spirit.

With the belief of restoring the old as the old, however this restoration can still give a new look. The concept of “the old” needs to be broadened, which could become a habit or exist in our consciousness. Pattern is a new expression of the old. The graphic language formed by geometric curves inherits the classic elegance in French gardens during Rococo period, at the same time building up a cultural circumstance among indoor floor materials, to arouse memories and review the past. Beneath the veil of these “shaping” there is the seeking for similarities of the “inheritance”.

C. Methodology
It is more accurate to describe this project as an identification of a culture and history than a reconstruction of an old building. FUXING Plaza shares not much connection virtually with Fuxing Park. So would it be a true “refresh” by partially infusing contemporary design language? Lingering in the park, people could still feel the fascination and charm brought by the French garden, and also experience the twists and turns in this city called Paris of the East. The unique fields of geometrics, symmetry and order in the French garden have been transplanted into the WE+lab FUXING Plaza project. It is a conversation between the inside and the outside; it is the responses from the new to the old; it is RoarcRenew’s interpretation of urban renewal; it is also a salute to the only French garden in China. 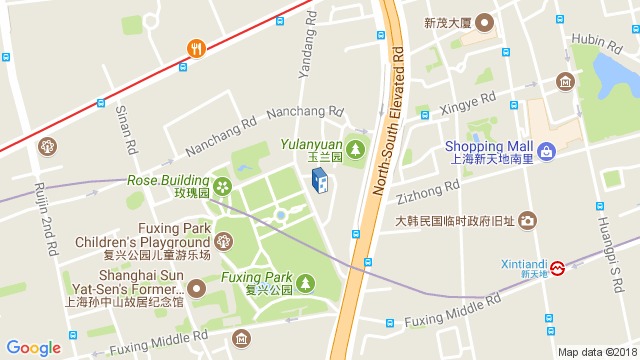 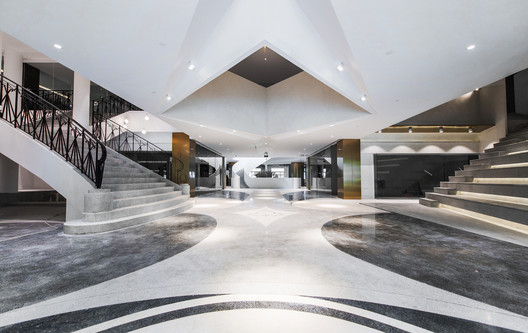