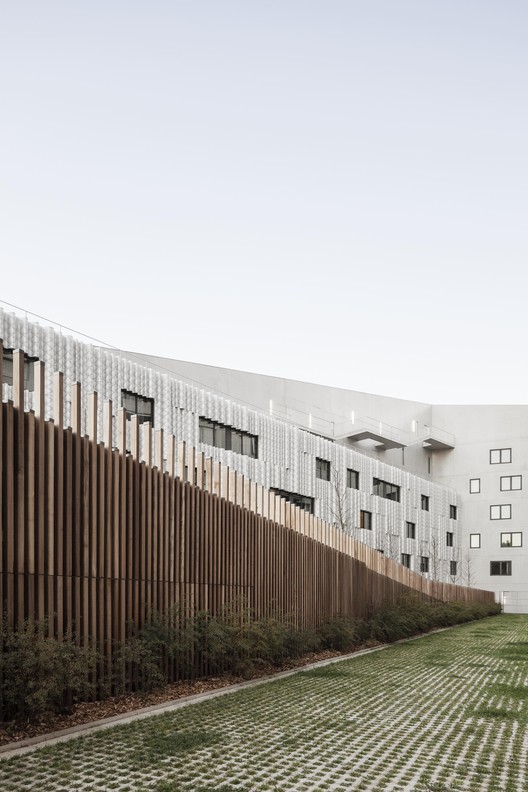 Text description provided by the architects. In an area of urban redevelopment alongside the northern stretch of Paris' boulevard périphériquering-road at Porte Pouchet, the long facade of the Odalys City*** 148-room apartment hotel faces onto what is soon to be Place Pouchet. The project is part of a larger scheme for a zone of urban development directed by urban planners TVK and Michel Guthmann.

The massing and envelope of Hardel Le Bihan's architectural proposal for the hotel address three issues:

The arrangement of assorted spaces and scales, at first glance difficult to unite, within a sprawling and varied area that goes from the metropolitan infrastructure of the boulevard périphérique and vast office buildings, to the more human, residential scale of Rue Rebière, a local nursery of contemporary architecture. The pointed edge nearest the périphérique indicates the presence of the square below, while keeping a low profile out of courtesy to the neighbouring residences.

Respect for the visual comfort and privacy of the residents of the Borel flats to the rear of the site. The new building wraps around the block of social housing, always keeping a polite distance. It is organized so as to leave distant views for the residents. Where the facades of the two buildings are closest, it is carefully designed for discretion: from the 4th floor up, no bedroom face onto the flats.

The slope of the site prompted the architects to split the project: a lower building is occupied by a shopping center, helping to distance the development from the flats. Around this annex building, which is clad in timber and has a green roof, a garden has been made and planted with trees. At the back of the new building, the hanging fire escape is a design feature in its own right, providing the flats with a carefully detailed neighbour.

Reducing acoustic reverberation in the future square. Rather than creating additional disturbance, the undulating metal cladding of the long facade contributes to urban comfort by diffracting traffic noise. This wave was also designed to bring a bit of joy into this cold and impersonal zone on the city's edge.

The program imposes a long and monofunctional facade, despite the presence of shops on the ground floor and the breakfast room on the 6th floor. In order to avoid the monotony of long lines of windows, they have been grouped into twos or threes, with windows as large as possible along the périphérique.

Evolution of the building and change of use. Inside, the circulation spaces reveal surfaces of unfinished concrete, neither painted nor plastered, particularly resistant to knocks from baggage, etc. At the center of the building are the lift cores. The long corridors are naturally lit by means of openings in the lift shaft and windows at either end.

The corridor and facade walls are load bearing, whereas the walls between the bedrooms are lightweight partitions for easy dismantling, a design choice on the part of the architects in case of change of use: large, open floors could easily be created. 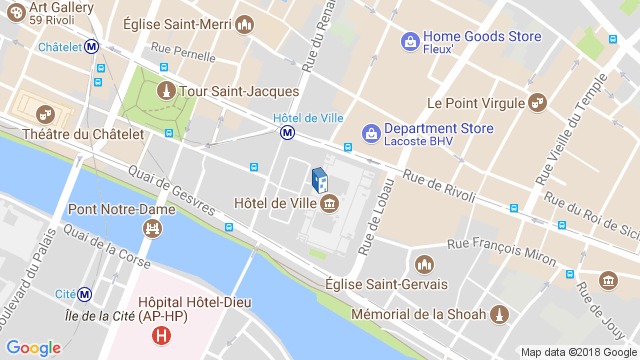