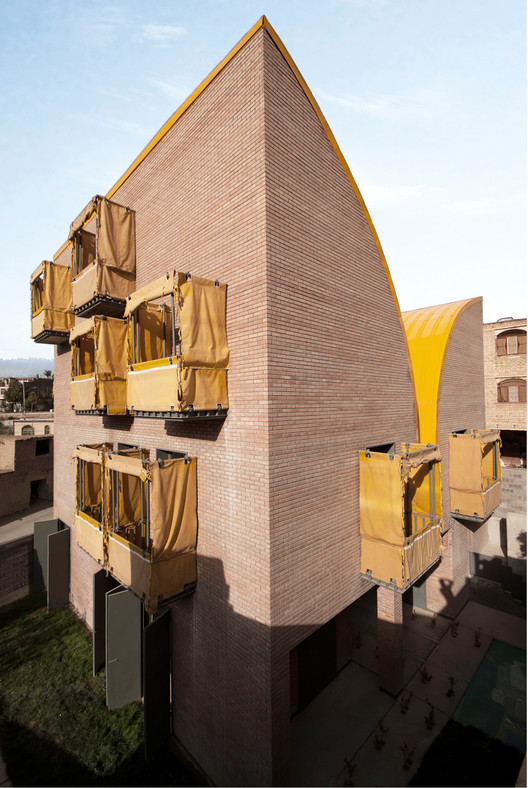 The habitat for foundling girls is located in the historical fabric of Khansar, a small town in the heart of Iran. Before evolving into a residence for orphan girls, our charitable client had intentions of building a public clinic. We came up with a proposal of a welfare institution since the site’s location could eventually come to help its future deprived users. The orphans can find shelter under the protection of history: they will be surrounded by three of the city’s historical monuments that could serve as parents.

The accepted proposal turned into a project intended to change the point of view over orphan girls as stigmatized children who need pity into an inseparable but normal part of society. The aim was for them to move away from being under surveillance toward having a normal life in the introverted and closed minded social context of Khansar. The girls just needed a homey apartment that looked cool, make them proud. The diagram supposed to be a home opposed to a disciplined space of a dormitory that almost looks like a prison.

An architecture that is both modest and monumental, the residence aimed to provide the girls with not only a dormitory with public and private spaces but also with special balconies that set the stage for a sociable scenario: they can express themselves through the changing festivities of mourning and celebration or the changing seasons by changing the 'Hijab' of their balconies, just like they are used to wearing and changing their Hijab and Chador in accord with the town's cultural timeline, reminding aesthetics of censorship.

An honest construction technology was decided for this charity project with a site area of 354sqm and a built area of 800sqm in four levels. Construction cost –with local craftsmanship- ended up with less than half compared to the common and future maintenance costs optimized to the minimum.

In order to have a space with an indelible appearance, the process of construction went as close as possible towards basic essentials resulting in an interior that is materially identical to the exterior.

We believe that architecture can contribute to improving social wellbeing and ethical reform, and to the extent that we were responsible, tried to make a change: to move from exclusion to inclusion, from reclusion to seclusion and from deprivation to privilege and to value and encourage charity organizations to benefit from the added values of architectural solutions.

Yet the story is not over. Today, the building is being used not the way it was planned to the girls live in controlled surveillance, with obligatory closed windows and unused balconies. But our client and we are still trying our best to make a change. Fortunately, our ties are strong.

At the end, in this project, we decided to push the boundaries of architecture, to use it as a media that can affect humanity and to improve the quality of life.

The question would be what more one can expect from architecture?

Simple and available construction technology is optimized in this project.

After execution of the steel structure, the concrete floors were actualized and finalized after a rotational polishing. The wall post containing the mechanical and electrical facilities are performing as a reachable ducting system, being connected to the structure. The wall posts are supporting the interior and exterior brick walls. The brick walls were finalized during the construction phase and are standing as they are. Those walls have not gone through the finishing process.

“Laybid” stone blocks are connected to the concrete floors, performing as interior cornices. The exterior cornices have a U shape. The property walls are made out of cement blocks and concrete wall posts.

The walls of the interior space, the staircases, and the water fountains are made out of concrete, implemented by locals.

As a result of exposed mechanical and electrical facilities, removal of finishing stage in the construction process and durable materials, it is expected this building to last long and to sustain itself with a minimum maintenance fee.

The project has several considerable socio-political impacts on society.

Creating an opportunity through architectural principles for such a space to exist through a charity program, provided the orphans a space with quality despite the financial issues of the project.

In the meanwhile the historic fabric of Khansar is now hosting a group of innocent youth who have a vague family background which results into two aspects: firstly the history of the site is providing these children a genuine importance and secondly, the children are bringing back the energy and life spirit to the old fabric.

In terms of the spatial organization, changing of the spatial diagram of a dormitory to a home creates personal spaces and a sense of belonging for the children.

Rooms organized around a tiny public space with an independent balcony toward the city.