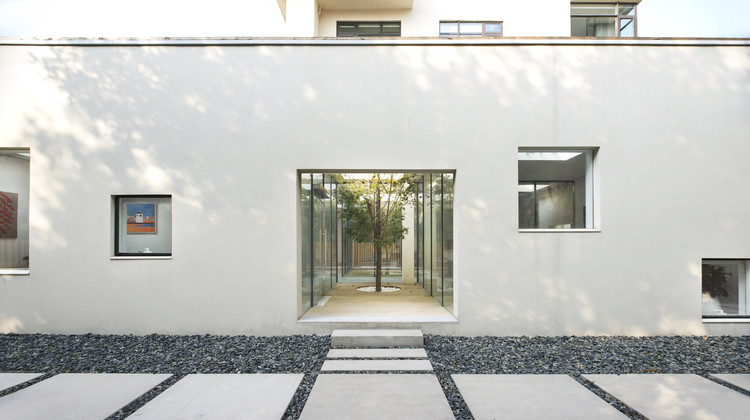 Text description provided by the architects. This is a building complex for an architectural material company that mainly deals with import carpet and domestic acoustic absorption material. We renovate and expand the existing building which has basement floor and 3 floors above the ground.

Due to the difference of ground level, basement floor has open space on its south side, but on its north side it can’t get daylight. We need to carefully design the expanded volume so as not to block the daylight into the existing space. We studied a lot of models, like hollow volumes around central courtyard with several separated volumes, and finally decided upon a simple box. As a result, on the one hand its volume is just a simple box with a lot of randomly openings on its walls and roof, on the other hand the four scattered small courts make the plan complex.

The ceiling of office area on the first floor is designed as sawtooth ceiling, adding the fake beams to hide the existing beam. By putting the lighting at the internal corner of the ceiling, as if the daylight from the sawtooth ceiling adds rhythm to the office place and it is filled with sufficient and homogeneous light.

On the second floor, galleries, conference rooms and president's office are required, and each room is separated with glass partitions. Those partition is cranked to unevenness and Ivy is hanged inside glass alcove. Coupled with the black colored glass on the corridor, the uneven glass irregularly reflects the scenery and adds unusual effect to the ordinary life.

In the residence on the 3rd floor, the space is design as minimal in which gray is set as base color. Indirect lighting that illuminates the wall and ceiling is arranged in a balanced manner , making it a comfortable space enveloped in warm light. 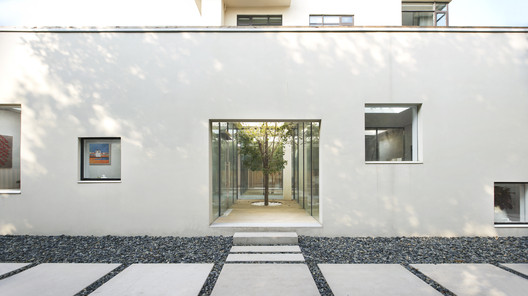