Save
Second Chicago Architecture Biennial Closes with Over 500,000 Attendees
Presented by:

Chicago Mayor Rahm Emanuel has announced the figures for the 2017 Chicago Architecture Biennial, which closed its four month run on Sunday, January 7th.

The second edition of the event, helmed by Artistic Director Sharon Johnston and Mark Lee, was able to match the success of the inaugural edition, seeing 554,866 visitors from around the world.

"The second Chicago Architecture Biennial reinforced Chicago's reputation as the vanguard of architectural, art and design innovation on the national and international stage" said Mayor Emanuel. "The City of Chicago is naturally suited to host an architectural event of this scale, and I want to thank all of the architects, organizers, and residents who made this such a tremendous cultural, educational and economic success for our city."

Titled Make New History, the 2017 edition featured installations and performances from 140 architects and designers from 20 countries, activating important cultural spaces throughout the city. The core sites of the Biennial, including the Chicago Cultural Center and the City Gallery in the Historic Water Tower, received 290,834 visitors throughout the exhibition, an 8% increase over 2015. An additional 264,032 people attended satellite sites extended all over the city and the region, including the 6 new Community Anchor Sites.

“Mark Lee and I were honored to serve as artistic directors of the second edition of the Chicago Architecture Biennial and to have the chance to enable artists and architects from around the world to address its “Make New History” theme,” commented stated Johnston. “We feel incredibly lucky to have experienced the Biennial as both participants in the 2015 edition and as artistic directors for this edition.”

“In this transformative year for our practice, it has been incredibly meaningful to engage with architects and artists from around the world in questions of history and architecture as an evolutionary practice,” added Lee. “The enthusiastic reception to the Biennial and its embrace by the general public confirms that our inquiry has launched a dialogue that has far-reaching significance which will resonate into the future.”

Mayor Emanuel and Chicago Architecture Biennial Chair Jack Guthman also announced the dates for the third edition of the event. The 2019 Biennial will run from September 19, 2019 to January 5, 2020.

See more coverage of the 2017 Chicago Architecture Biennial below: 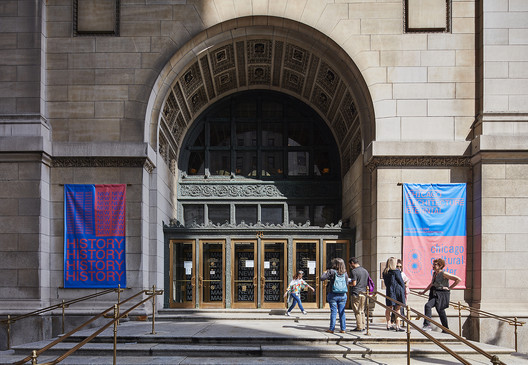