Save
The Renovation of a Hutong House / Chaoffice 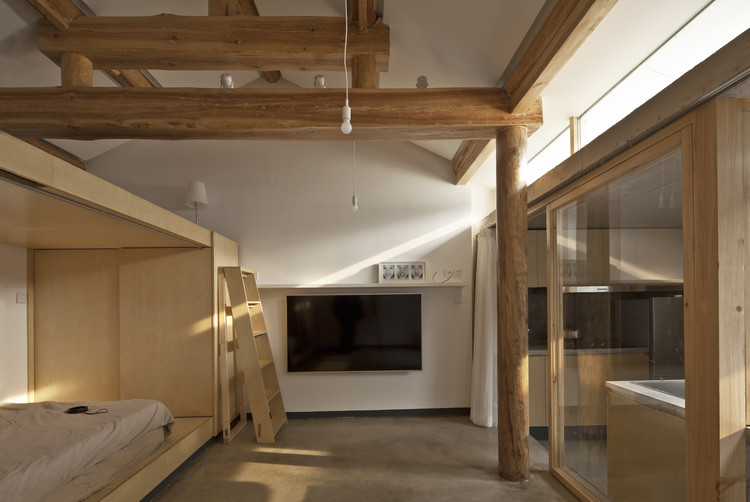 Text description provided by the architects. The urban condition of Ciqikou street west area, the site of this project, is semi-chaotic or could be described as a slum, which is a typical urban form in Hutong areas today in Beijing city. The local people have coined the term “messy yard”.The spatial condition of the “messy yard” is completely different from its original form as a Siheyuan Yard. The way in which people have inhabited it has changed to a large degree over time.

From atypological view, the messy yards area is more like other slums which can be found everywhere in the world, such as St Paul, Delhi, or Istanbul. - Multiple land ownerships, illegally sold and bought property and occupation in history, disgracefully crowded and insanitary, lack of sunlight and fresh air.......

On the other hand, over time, the residents changed, people have come and gone, immigrants of the first generations grew into large families. Invisible contrasts made between neighbors help to share the space. It seems that, the spatial condition becomes solid and unshakeable. The whole urban area becomes a prison. Residents are virtually trapped within the spaces in which they live.

The urban reality may not change easily. The above description is the background of this project.The strategy is to maintain the original structure on its original boundaries, in order to keep the relationship between house and environment. Both windows and the door are modified in position and scale. A continuous canopy was installed.

Work within the boundary is about rearranging the spatial resources, in order to  relink the prison like space back to the city and nature.For the multiple aims, the strategy is about two "boxes", "installations" or "chambers" in the original room. They are “room for table” and “room for privacy”. We call them RT and RP.

The “RT” is a boundary within itself. The two sides are outside the public corridor and inside a private space. More generally, the "table room" changed the boundary from a wall into a volume.Outside the volume, for recreating of part of the roof, there are new possibilities for windows, 3 meters high, which one can open for sunlight; but without the need to sacrifice privacy.

The new structure is a construct inside the original wall, which has been strengthened. In addition, the reinforced concrete roof is stable enough for people’s weight. Open views and plenty of sun light come together to create a pleasant space.

Inside the "RT", double curtains function in several ways, controlling the light and privacy conditions. A rotatable window divides the “RT” into two independent rooms. A kitchen and a Studio. This plan meets the needs of the homeowner, as she loves to cook. When the window rotates, the table can be used on both sides. meaning the space on the table can be fully utilized and shared by both rooms.The window below the roof and above table also functioned as an access to the roof.

The other side of the house is the "RP", which is constructed by a light steel structure and plywood. This "chamber" is more like a Chinese traditional "Babu bed" which is both a bed as well as a bedroom. There are spaces for a bathroom, wardrobe, dressing room, etc. There is also a "roof space" on the top of the "bedroom" which provides a personal space for the homeowner, who can have a rest, read or meditate there.

Most storage spaces are hidden under the table or bed. Thus, the place between two rooms could be a totally empty space for uncertain functions. Like a party room, family room, or play room.

According to the plan, functions within the house have been compressed into two defined spaces, leaving the centre completely free from the chaos which defined the the house completely prior to the plan being enacted. This has thus provided a sense of dignity for those using the space, as well as a sense of comfort. The space can thus also been seen as a sequence, the home being subdivided into both spaces made up entirely of functional aspects as well as spaces defined by clarity. In addition, a small section near the entrance was repaved, creating a bridge between the home itself and its outer environment, as well as extending this sequence outward.

the strategy is experimental, the installation of two "boxes" cooperate with the original building, and at the same time keeping the relationship with its neighbors. It is my hope that this plan may be a way to stimulate further changes in the environment and urban fabric. 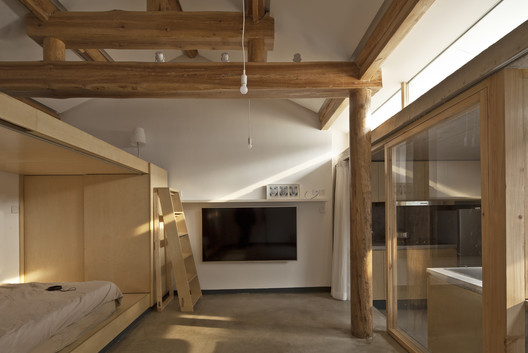