Originally conceived as as 22-story hotel and residential tower, the project has now been shortened to 12 stories (130 feet) to meet restrictions imposed by the city’s Downtown Community Plan, which calls for “aggressively slow growth” and a “lower scale downtown” of mainly 4-5 story tall buildings.

Instead, the new renderings show what appears to be a second, shorter tower located on the opposite side of the site. The original tower will now contain the hotel, while 79 apartments will be located across the site. In between the two high rises, the project will contain a podium of retail space and a museum, which will incorporate two existing buildings as a bookstore and cafe.

The new downtown plan mandates building rise no higher than 84, but will allow certain structures to reach 130 feet provided they reach a developer agreement that provides community benefits such as money for parks and transportation systems.

Developers M. David Paul Associates and the Worthe Real Estate Group have commissioned Frank Gehry to design a mixed-use hotel and residential tower in his hometown of Santa Monica, California. The 22-story "Ocean Avenue Project" aims to stimulate the coastal city's economy with street-level restaurant and retail space below a 125-room hotel and 22-unit condominium tower topped with a rooftop observation deck. 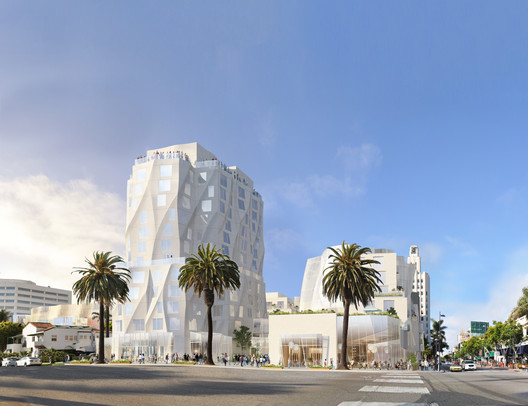