Plans have been revealed for the “largest wooden building in the world” to be located just outside Eindhoven in the town of Veldhoven, The Netherlands. Known as the Dutch Mountains, the complex was conceived via a multi-disciplinary partnership made up of tech companies, service providers, architects and developers, and would contain a hi-tech, mixed-use program for residents and visitors.

Located within the De Run industrial park, the project is the brainchild of a team including BLOC, Studio Marco Vermeulen and Urban XChange; developing partners Asito, Beveco, Dell-EMC, Heyday, Spie and Strukton; and knowledge partners Arup and Off Road Innovations.

The complex would be completely self-sufficient, containing closed systems for energy, water and materials. By using wood as the primary construction material, the building would also reduce its overall carbon footprint.

The Dutch Mountains is envisioned as a ‘total service system,’ meaning that all of the necessary infrastructure for a variety of uses are provided as services within the project. Facilities for conferences, commercial spaces, public facilities and a hotel could all be located within the building, and would be powered by the building itself.

The building also plans to continually evolve throughout its lifespan by the introduction of the latest technologies that increase building efficiency. For example, the facade has been designed to produce energy – if a more efficient system later becomes available, it will replace the old facade, which will in turn by recycled or processed. The complex will harvest data from its users to optimize how spaces are being used and to adapt to changing market conditions.

Project proponents hope the Dutch Mountains will trigger a larger transformation of the De Run area, as outlined by a larger master plan developed by the Veldhoven municipality. 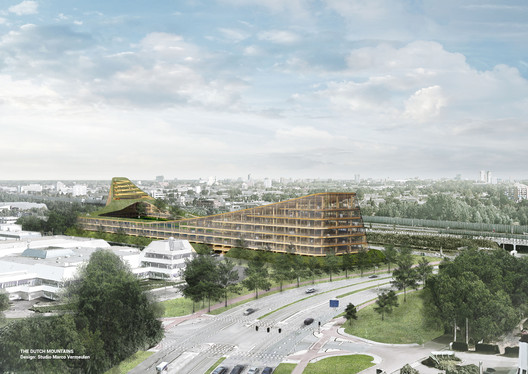