“As soon as we were able to get into the space we wrote the entire menu in basically a day. It was being in the building itself that had this creative charge about it,” said chef Jordan Kahn.

At LA chef Jordan Kahn’s new fine dining adventure, it was the architecture which informed the menu.

“It was just pulling me in against my will and that was the first time I’d ever been moved emotionally and physically moved by a piece of architecture,” Kahn said.

“It was a really intimate collaboration with myself and the architects Eric Owen Moss and his team.”

"Vespertine" . We all have dreams. Some of us talk about them, some hold them close to the heart. We have our vulnerabilities, our fears, our inhibitions. We have those things that hold us back, keep us from doing what we believe in. But sometimes, we can overcome those. We realize what we believe in, and we take control of it. We allow ourself to let go of the fears and insecurities, and we do something incredible. Last night I saw Jordan Kahn. I saw inside his mind, I felt what he felt. I've known him for years, and in one evening I felt as though I knew him better than I ever had before. Congrats to the entire @vespertine.la team. You've created something original and inspiring. . . Photo: enjoying the serenity of the seating area outside post meal. The slight evening mist made the building glow...

The EOM building is two stories divided into four levels. The interior is enclosed in glass which is further enveloped by a red steel grid skin. Architecture, art, music, sculpture, and food synthesize to create a four-act dining event. 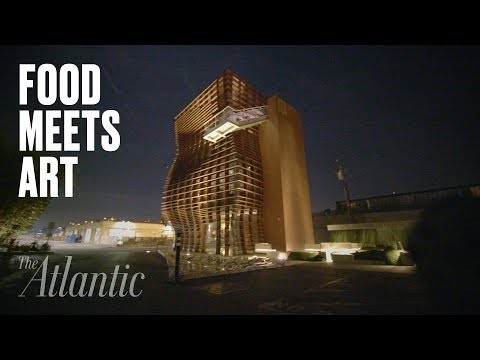