Text description provided by the architects. From the street, the house appears as a wide-brimmed glass pavilion rising from a solid concrete base. Its forthright, lantern-like public face is complemented by the solid form of the guest house, its back turned coyly to the street. Together they form a processional entry, first approached by gentle stairs cut into the grass, then passing between them to reveal a peek at the pool, as well as views of the length of the site.

The main house’s ground floor interior expands horizontally through the massive sliding glass doors of the living room and kitchen. The volume is expressed as a simple box that contains a smaller box, which houses the powder room, stairs, pantry, and mechanical system and is wrapped in untreated framing-quality fir, chosen for its warm and tactile qualities. A ceiling of steel beams with structural fir decking engages the southern length of the space, creating subtle material shifts above and below to frame the views to the outdoors. This lofty ceiling provides a contrast to the lower drywall ceiling that shifts the color and texture palette toward the kitchen and dining area’s sleek, simple, white cabinetry—a minimalist setting for the colors and activities of the kitchen.

The pool is placed right outside this public area; when the sliding doors are open, the transition is expansive, seamless and immediate, converting the house itself into a pool house of sorts, and expanding its footprint well beyond its walls.

Upstairs spaces are organized in the same straightforward approach: perimeter floor-to-ceiling glass connects interiors to the tree canopy, sky, and distant views to the downtown skyline. The entire western facing end is devoted to a 15-foot-deep screened porch nestled into the treetops, inviting a sensory experience of the outdoors in a comfortable, protected setting.

The guest house doubles as a home office and art studio, its glass wall framing views to the activity inside from the entry court and the outdoor spaces beyond. Like the spatial strategy of the main house, the guest house is conceived as a box within a box. The interior box contains cabinetry and separates the bathroom from the front room while housing a fold-out desk and drawers, as well as a queen size bed that unfurls when needed.

Cast-in-place concrete is the dominant voice in the material conversation, the remnants of its two-foot-wide plywood forms texturizing the surface just enough to catch fleeting shadows and animate the surfaces. The main house’s concrete walls address the challenges of the Texas climate—the smaller exterior wall acts as a buffer against the harsh Texas sun while the thicker interior wall acts as a thermal flywheel, allowing interior temperatures to remain steady even in extreme summer heat. Eight-foot overhangs further mitigate heat gain in the hottest season during which no summer sun penetrates the house on the southern exposure, while welcome sunlight washes into the living areas in winter months.

Moving along the site from the lowest point at the street to the highest at its western edge, the house appears comfortably tucked into the hill, its openings oriented toward lightly choreographed scenes of respite and nature. Its simplicity of form magnifies the attention to detail that can enchant the simple acts of every day life. 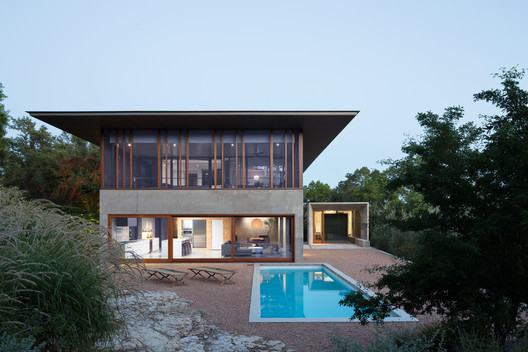