Budapest-based architectural firm Hello Wood has continued its annual tradition of constructing wooden Christmas trees, this year expanding the program with a total of 5 trees throughout Europe. In London and Vienna, trees made of sleds recall a design concept first used by Hello Wood in 2013; meanwhile, two locations in Budapest and in the Hungarian city of Kecskemét are witnessing the return of the firm's "charity trees," installations made of firewood which are later dismantled and distributed to families in need for the winter season. 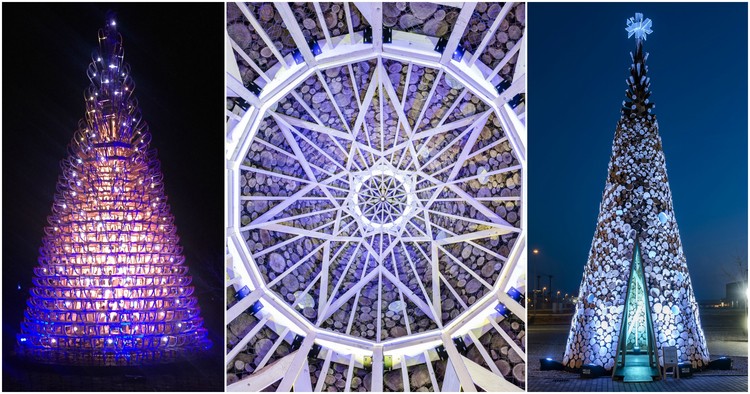 The two sled trees, located at Kew Gardens in London and the Belvedere Palace in Vienna, use 400 sleds each to create the familiar tree shape.

In Budapest, two trees are located at the city's Christmas market in Óbuda and at Kőbánya, each 16 meters tall and weighing 40 tons, providing enough firewood for 25 families. The third tree in Kecskemét is 11 meters tall, using 20 tons of firewood which will later provide enough for over 10 families. Together, these three trees will provide enough firewood for over 60 Hungarian families during the harshest weeks of winter.

Key to animating each of the trees is their lighting design, which was provided by Laurent Louyer of Creatmosphere in London, and by Visual Europe Group in Vienna and Hungary. The trees in Budapest and Vienna also serve a role as part of the public space, providing access to the public to the inside of the trees—offering a sanctuary from the weather and the chaotic Christmas rush for passers-by.