Save
Christmas Tree Made of Sledges / Hello Wood
Share
Or
Copy

From a distance, it would seem a traditional Christmas tree has been erected in front of the Palace of Arts in Budapest. But upon closer inspection, a surprise is revealed- the tree is made up of 365 sledges. Designed by Hello Wood, an architecture and design studio based out of Hungary, the 11 meter tree will eventually be disassembled and the sledges given to the kids of SOS Children’s Village. Read more about the installation after the break... 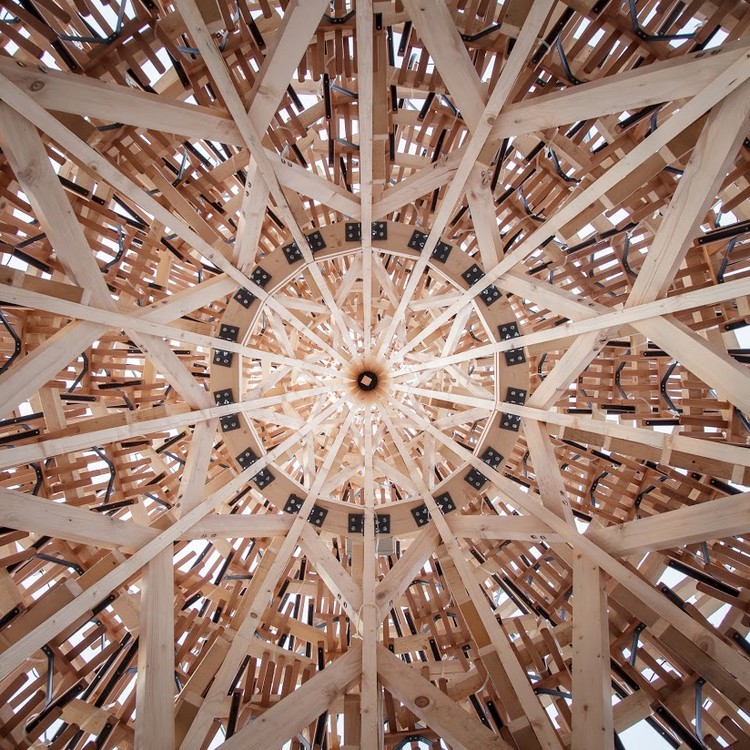 Hello Wood, a Hungarian studio known for their social awareness and original approach, decided to change the normal idea of a Christmas present with their tree design. The tree was built in just a week, and allows space for visitors to come inside and experience the tree. As architect Andras Huszar of Hello Wood stated, “We wanted to create a temporary installation, which is not only spectacular, but its main elements remain usable so they can be distributed among kids. For us, this is the point of social awareness: you don't only show something, but at the same time you give something unique.”

The tree is safe from heavy winter winds with a base weighing over four and a half tons. The construction of the tree began with a 10 and half meter tall wooden frame made by the carpenters of Hello Wood. The frame was brought to the site and put together using both welding and a crane. Sledges were fixed to the wooden frame over the course of four days.

“We were thinking a lot about what the secret of an original Christmas decoration is. The sledges were the good choice, because they are symbolizing Christmas, but free from the commercial Christmas clichés and the general bad taste that comes with them.” says David Raday, creative leader of Hello Wood, one of the concept originators.

The Christmas Tree installation goes beyond art, activating social space to also give back. Thanks to the Hungarian company Telekom, the sledges will be given to children of SOS Children’s Village two weeks after Christmas.

For interactive panoramas of the project, click here, and for ArchDaily's coverage on Hello Wood click here.

Hello Wood is an international art program based in Budapest, Hungary. Its work integrates various fields of art, design and science. It is best known for its flagship event, a one week long art camp curated by founder Peter Pozsar every summer. It is also an architecture and design studio, organizing projects and events defined by openness, experimenting, social sensitivity, innovation and development.