The team led by Schmidt Hammer Lassen Architects has been selected as the winners of a competition to design a significant new Sports and Culture Campus in the Gellerup neighborhood of Aarhus, Denmark. Covering an area of 10,000 square meters (107,640 square feet), the new complex will contain a wide variety of athletic and leisure facilities aimed at becoming “an inspiring, welcoming and open destination for city residents and visitors.”

As the city’s most culturally diverse district, Gellerup has seen an influx of new residents relocating from all around the world. To cater to the needs of these new residents, the city has developed an ambitious redevelopment master plan that will add numerous new civic centers to neighborhood, including the Gellerup Sports and Culture Campus.

Containing a library, gymnasium, swimming pool, “playful activity house” and community meeting spaces and facilities, the complex is expected to see more than 600,000 per year. Responding to these needs, the winning team, consisting of SHL with MASU Planning ApS, Loop Architects and COWI A/S, have designed the facility to be as welcoming and familiar as possible.

"When designing the campus, our intention was to create a welcoming place that is open and relevant for the local community, while also appealing to residents from across Aarhus and the world," said Trine Berthold, Associate Partner at Schmidt Hammer Lassen Architects. "We hope to draw people into the campus's various elements with architecture that is rooted in the local environment, but also speaks to an international audience."

The proposal aims to break up the rigid grid of the district with an open layout of shifting and rotating structures, articulated to strengthen community connections and a sense of democracy. The building overlap in intuitive ways to create spaces for casual meeting and interaction.

"In a community as diverse as Gellerup, it is important that the new campus be a democratic place that is friendly, unpretentious and easy to move through so that it encourages use by every member of the district and interaction between people of all walks of life," added Berthold.

The winning proposal was selected by the Aarhus Kommune and housing association Brabrand Boligforening from a pool of teams that included Danish firms 3XN and CEBRA. The project will now continue into the development phase, with construction planned to begin in early 2018 and complete in 2021. 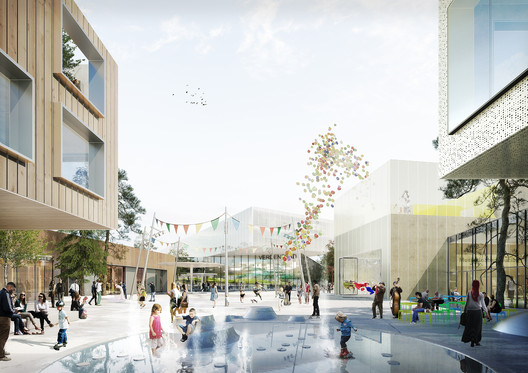