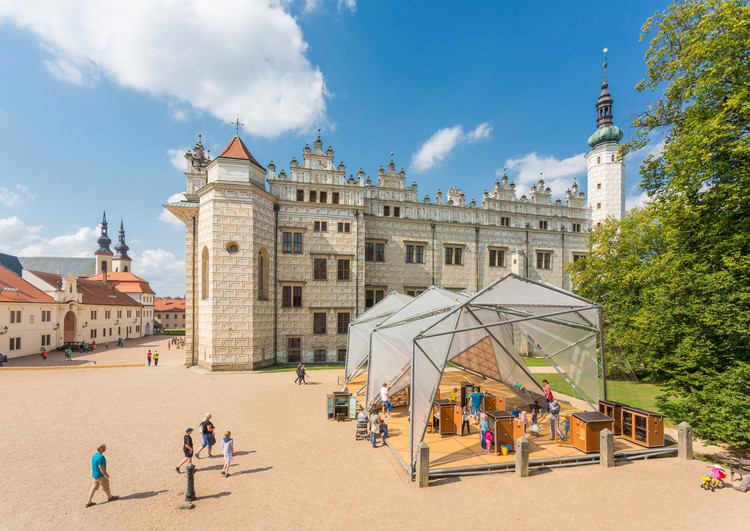 Overall Conception
Along with its historical buildings and adjacent parks, the chateau has created an entirely unique complex for centuries. Our design works from the idea of the rooms - spaces, which are defined by the individual buildings of the chateau hill. To support this reflection and to define more clearly the individual spaces, we have added two new objects to the existing configuration of buildings. The first is the bench set between the entrance courtyard and the farm courtyard.

The second is a pavilion with a children’s program, located between the carriage house and the chateau. The other solutions of the building are reconstructed and a new function is set into them, which means also a new life for the chateau hill. Our conception starts from the monument preservation and architectural singularity of the complex, which we respect as a whole and supplement it only in some places. The newly inserted elements clearly differ from the existing historical parts. All of the new features are designed as a combination of steel and a light-amber translucent laminate. It was about putting a piece of jewellery on the chateau hill, which would have its magic corresponding to this environment.

Riding School
The first data on the construction of the riding school is from the middle of the 17th century. An extensive modification of the entire building took place in the 1970s. In order to ensure sufficient bearing capacity because of the planned placement of the archive in the area of the attic of the riding hall, a concrete ceiling and roof truss was built within the framework of these modifications. In our proposal, we have tried to respect at least those parts of historical structures that have survived to our day. From the street front, the original size of the window shadows, including the exterior boss, was restored. In the shield wall, the modern entrance to the archive was reduced. The historical building of the Riding School was reconstructed and the entrance portal was restored. The archive function was retained in the attic.

From the street front, the original size of the window chambranles including the exterior bossage was renewed. The modern entry to the archive was reduced in the gable. The historical building of the riding school was reconstructed and the entry portal was restored. The function of the archive was preserved in the attic. From the beginning, the investor intended to create a multifunctional variable space in the riding hall, where concerts for chamber music, film screenings, conferences and exhibitions can be held. Since we wanted to interfere as little as possible in a historically valuable building, we chose the concept of a newly inserted sliding object that can divide the riding hall and allow for a rapid change of function and acoustics. The new object consists of two parts - a sliding face and a solid body. Changing rooms for the performers, space for the technicians and social facilities for guests are located in the body.

The sliding face moves along rails in the floor and delimits the space for individual events as a divider. In this way, we can set the proportions of the space, and thus also its acoustic parameters. The floor is made of landings, which allow for independent stage lift, auditorium elevation or individual floor breaks during exhibitions. Stage lighting technology, acoustic resonators and other necessary elements are placed on an independent construction under the existing concrete ceiling of the hall. All of the new features are designed as a combination of steel and a light-amber translucent laminate. Since 2013, a number of events have taken place in the Riding School, such as the exhibition for the 100th anniversary of the birth of the painter Václav Boštík, but also several other exhibitions, a number of concerts and lectures, conferences, and even a fashion show.

Carriage House
The carriage house underwent a complex development. The archive and transformer station were located here. Both existing operations are removed from the ground floor and replaced thanks to the location of the carriage house by the function of a café. The second floor is used for the office of the administrator of the chateau complex. The subsequently placed partitions and the modern staircase were removed throughout the building. New masses were set into the space modified in this way in the places where the carriages had once stood. These new elements are the necessary social facilities of the café, bar and seating and are made of translucent laminate.

The big question was the exterior appearance of the carriage house, which was regrettably modified in the 1970s, when the ground floor of the building was raised by a floor and again during the actual implementation by ca 70 cm. Mainly, the presentation of the ledge deformed the material solution of the entire building. Therefore, there was a correction of the ledge by the removal of the beams, thanks to which the overall height of the carriage house was slightly reduced. With regard to the exterior facade, the decorative ledges have been removed, which are not proved in any of the original drawings or photographic documentation. The outer appearance of the carriage house should blend in with other buildings with which it had formed a complete configuration in the past, so the outer facade was covered with a light lime stucco.

Children’s Pavilion
An important element is the seasonal building of the summer pavilion, which provides a natural base for children’s activities. This object is a summer pavilion - a tent made up of triangular segments of a lightweight steel construction, where the panelling forms a translucent canvas. The tent is inspired by a child’s dragon that has dragged into the chateau gardens and separated the farm buildings from the English Park. The summer pavilion with a children’s program uses the natural connection to the café located in the carriage house and thus allows also seating. The object is divided into three parts, and mainly thanks to the choice of different activities for the differently aged children from the youngest with access only with the parents to the oldest, where more demanding activities are expected for the greater autonomy of children.

English Park
Part of the overall modifications was also the resolution of the English park, where the main emphasis is placed on the element of water. Since there were water elements in the park in the past, we tried to restore them. The water element naturally starts at the highest point where the chateau pond is preserved. The water management route starts from the greatest distance between the trees and is designed using computer technology with Voronoi geometry. 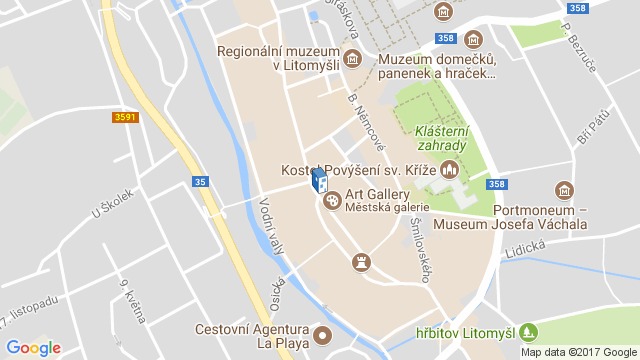 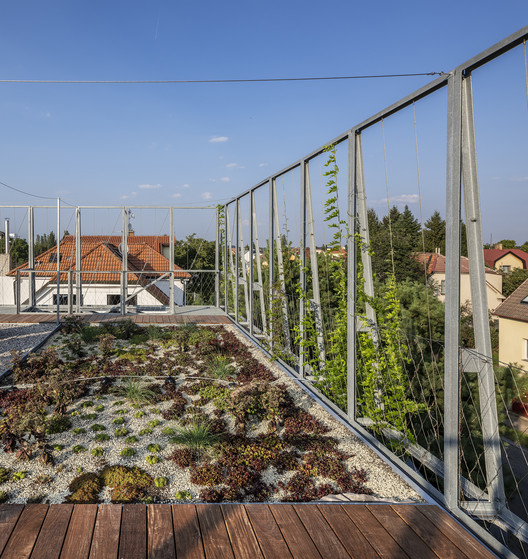 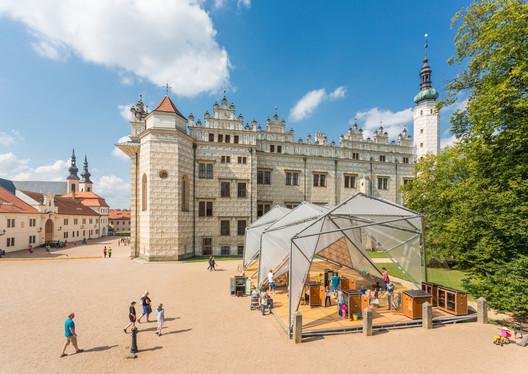