Save
5 Video Works Selected to Exhibit at the 2018 U.S. Venice Biennale Pavilion
Presented by:

Entitled “Transit Screening Lounge,” the collection of videos will explore narrative, speculative and impressionistic perspectives on the spatial conditions of citizenship.

“While each of the installations commissioned from the architects and designers will consider what it means to belong at different and specific spatial scales, the ‘Transit Screening Lounge’ will offer more ambiguous readings of contemporary citizenship, involving blurred boundaries, gray areas, and alternative histories," said curators Niall Atkinson, Ann Lui, and Mimi Zeiger. "The selected works look at citizenship through a lens of movement: migration, transgression, transmission, travel, and mobility, as a way to visualize conditions that can be difficult to delineate through traditional architectural means.”

The selected films include:

It's July 16, 1969, and the U.S. is preparing to launch Apollo 11. Thousands of miles away, the Zambia Space Academy is hoping to beat America to the moon. Inspired by true events.

Frances Bodomo, born in Accra in 1988, is an award-winning Ghanaian filmmaker. Her two short films Boneshaker (2013) andAfronauts premiered at the Sundance Film Festival and went on to play at several other major festivals, including the Berlin International Film Festival, Telluride Film Festival, and SXSW Film Festival. Afronauts was also exhibited at the Whitney Museum of American Art as part of the group show Dreamlands: Immersive Cinema and Art, 1905-2016. Bodomo is currently developing the feature film version of Afronauts.

Borrowing a title best known from the Bible, Exodus addresses the mass flight of people across the world in the wake of war, poverty, and social injustice. Through images of luggage adrift at sea, the video evokes the sense of being uprooted, losing one’s identity, and having to fight for one’s integrity.

Mandana Moghaddam, born in Tehran in 1962, is an Iranian-Swedish contemporary visual artist whose installation work was most notably exhibited in the 51st Venice Biennale. Following the Iranian Revolution, Moghaddam was granted asylum in Gothenburg, Sweden, where she continues to maintain her studio. Her work, which examines themes such as alienation, communication, and gender, attempts to bridge boundaries, inspire intercultural dialogue, and memorialize oftentimes contentious aspects of Iranian life.

Tunneling through commercial and industrial fiber optic networks and traveling in their shadows, Dark Fiber follows the course of a single cable, in a video that pushes against conventional representations of networks and logistics. The video’s montage sequences depict movement between systems and scales as seen in vast landscapes, industrial infrastructure, media apparatuses, art venues, domestic spaces, and imagined worlds.

Marissa Lee Benedict, born in Palm Springs, Calif. in 1985, is a sculptor and writer who currently lectures in visual art. Considering subjects that range from the distillation of algal biodiesel to the extraction of a geologic core sample with a set of gardening tools, her work draws on traditions of American land art to investigate the material conditions of our recently networked world. She earned an MFA in Sculpture from the School of the Art Institute of Chicago.

David Rueter, born in Ann Arbor, Mich. in 1978, is a visual artist, programmer, and assistant professor in art and technology at the University of Oregon. Employing video, custom electronics, software, cartography, and performance, Rueter's experiments and interventions confront established technical systems and their philosophical counterparts, opening cracks for radical alternatives and imaginations. Rueter is a graduate of the School of the Art Institute of Chicago’s MFA program in Art and Technology Studies.

Cosmic Generator explores a kaleidoscopic world in which the U.S. and Mexico are linked by a secret system of tunnels, which enable trade among various places and actors. The tunnels lead from the Golden Dragon Restaurant in Mexicali, Mexico, to a 99 Cents Store in Calexico, California, while an enormous plastic commodities market in Yiwu, China, also plays a role in the imaginary network.

Mika Rottenberg, born in Buenos Aires in 1976, lives and works in New York. Through film, architectural installation, and sculpture, she illuminates the connections among seemingly unrelated economies. Collapsing geographies and narratives, Rottenberg weaves documentary elements with fiction into complex allegories about human conditions and global systems. In 2018, Rottenberg is scheduled to present solo shows at the Bregenz Kunsthouse in Austria, the Bass Museum in Miami, and Goldsmiths Centre for Contemporary Art at the University of London.

Where the City Can't See is the first narrative fiction film shot entirely with the laser scanning technology used for navigation by self-driving vehicles. In a Chinese-owned and controlled Detroit Economic Zone, a group of young auto workers drifts around in a driverless taxi, searching for a place they know exists but that their car doesn't recognize. They are part of an underground community in which people adorn themselves in machine-vision camouflage and anti-facial recognition masks to enact escapist fantasies in the city’s hidden spaces.

Liam Young, born in Brisbane in 1979, lives and works in Los Angeles and London. He is a speculative architect who operates in the spaces between design, fiction and futures. He is cofounder of Tomorrow’s Thoughts Today, an urban futures think tank that explores the local and global implications of new technologies, and of Unknown Fields, a nomadic research studio that travels on expeditions to chronicle these emerging conditions as they occur on the ground. He has taught at the Architectural Association and Princeton University and now runs the groundbreaking Master of Arts program in Fiction and Entertainment at SCI-Arc in Los Angeles.

Learn more about the exhibitors here:

The curatorial team for the U.S. Pavilion at the 2018 Venice Architecture Biennale have announced the seven designers who will create the pavilion's main exhibitions. Consisting of architects, landscape architects, artists and designers, the group will produce responses to the theme of Dimensions of Citizenship, exploring "the meaning of citizenship as a cluster of rights and responsibilities at the intersection of legal, political, economic, and societal affiliations."

News and film descriptions via The School of the Art Institute of Chicago and the University of Chicago. 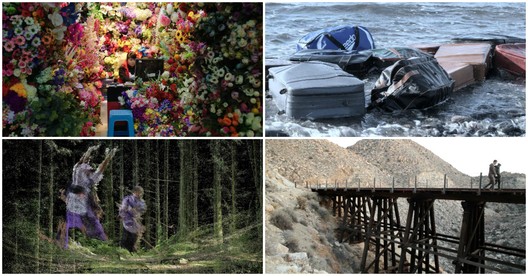